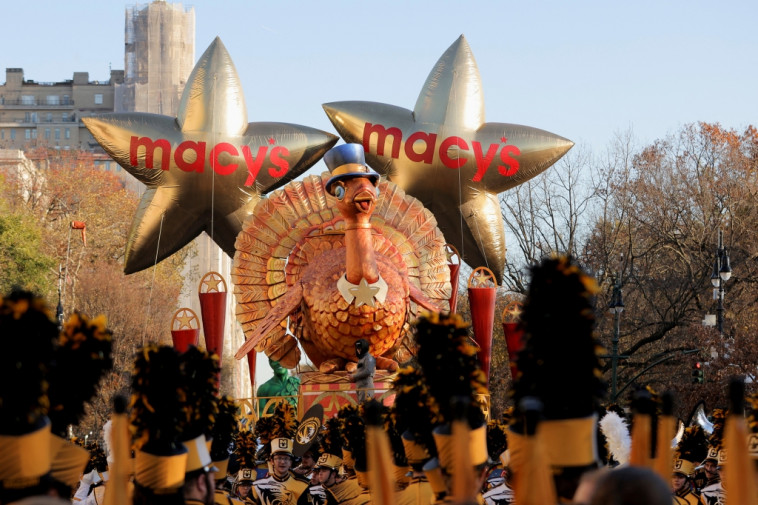 They’re a bunch of happy turkeys!

The quintessential Thanksgiving tradition kicked off on 77th and Central Park West at 9 a.m. to the cheers of spectators waiting to catch a glimpse of classic balloons like Snoopy and Pikachu — and some of this year’s new additions like Bluey.

Marisa Lau, a teacher celebrating her 40th birthday all the way from Sacramento, California, has wanted to view the parade in person since she was a little girl.

“This is a dream come true for me,” Lau, sporting a pair of turkey earrings, told The Post from her viewpoint at 53rd and Sixth.

“This is the best Thanksgiving for me. It’s going to be bigger and better than on TV. I can’t wait to wave, cheer and scream. It’s going to bring my inner child back,” the excited spectator said.

The massive crowd has drawn in both New Yorkers and tourists looking to take part in a tradition that for many signals the official start of the holiday season — especially with Santa Claus set to make a special appearance and close out the event.

Some kids waited excitedly for the arrival of their favorite characters.

“I want to see the Bluey balloon,” said Tsehai Burns, a 15-year-old from Flushing, Queens who was watching an episode of the show on her cellphone before the parade began.

“I watched it a lot all summer and I am a big fan. I even have the toys. When they pass, I’m going to sing the songs and dance,” Burns added.

While the tenth grader was excited to witness the iconic character balloons, she said she was most looking forward to eating her Nana’s sugar cookies and cupcakes in the shape of turkeys during her family’s Thanksgiving celebration later.

Macy’s beloved parade was back last year after going virtual during the COVID pandemic.

This year’s parade will feature 16 giant character balloons, 28 floats, 40 novelty and heritage inflatables, 12 marching bands, 700 clowns, 10 performance groups and a slew of musical stars. The parade will be put on by the work of over 5,000 volunteers.

Some new balloons will hit New York City skies this year, including Bluey, a character from a popular Disney Junior cartoon about a 6-year-old Australian Heeler dog and her canine family.

Other new additions this year include “Diary of a Wimpy Kid,” from the beloved children’s books; Dino and Baby Dino, an electric green pair of dinosaurs; and the one-eyed Minion, Stuart.