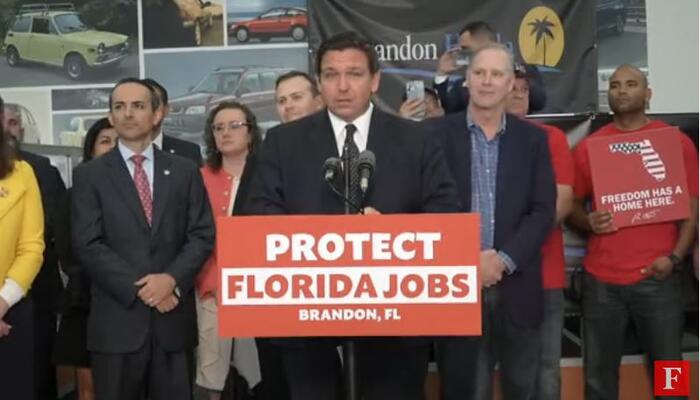 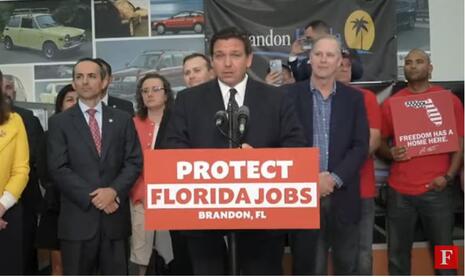 But it was a remarkably different picture this week, when Florida’s lieutenant governor, Jeanette Nuñez, was a prominent speaker at a rally organized by anti-vaccination activists on the State Capitol steps.

The jarring scene gave vaccine skeptics in Florida a big win and moved the state further away from the guidance of federal public health officials, reflecting how a highly politicized pandemic has only become more so as Republican-controlled states confront the Biden administration’s wide-ranging attempts to ease it.

This week the state Republican Party passed bills to curtail mask and vaccine mandates during a special legislative session, meant to combat potential federal overreach. Mazzei really reached herself to make DeSantis into an anti-vaxxer:

“No nurse, no firefighter, no police officer, no trucker — no anybody — should lose their job because of these Covid jabs,” Mr. DeSantis, who has taken to dismissing the vaccinations as “jabs” or “injections,” said on Thursday before signing the bills….

“Jabs” is what the vaccination goes by the United Kingdom. Are they dismissing vaccinations as well?

The move against vaccination requirements has empowered groups whose fringe views on the vaccines were met with little pushback from Republican legislators, a striking departure from past Florida politics.

“The conscience of their caucus has been hijacked by extremes,” said Representative Ramon Alexander, a Tallahassee Democrat. “It’s a danger to democracy.”

It took forever for Mazzei to admit vaccination rates are a non-issue in Florida.

About 60,800 people have died of Covid-19 in Florida. The state was hit hard by the virus this summer, when the Delta variant filled hospitals in much of the state with more patients than at any time during the pandemic. That wave has burned itself out, and in recent days new cases and hospitalizations have fallen to some of the lowest levels in the country. About 61 percent of Florida’s population is fully vaccinated, slightly higher than the national average, according to federal data.

Even that didn’t stop the Times relaying partisan criticism.

Critics of the governor have said that his fight against mandates resulted in needless deaths. Florida experienced its worst daily death tolls during this year’s summer surge, when vaccines were already widely available.

The governor’s dalliance with vaccine doubters may have begun in April, when Mr. DeSantis declined to get his Johnson & Johnson shot in public, joking that he did not need to show off his biceps. (He has since declined to say if he has received a recommended booster or intends to get one.)

(It’s not enough to be merely vaccinated – now you have to get your booster shots religiously to be considered truly and fully vaccinated in the eyes of the Times.)