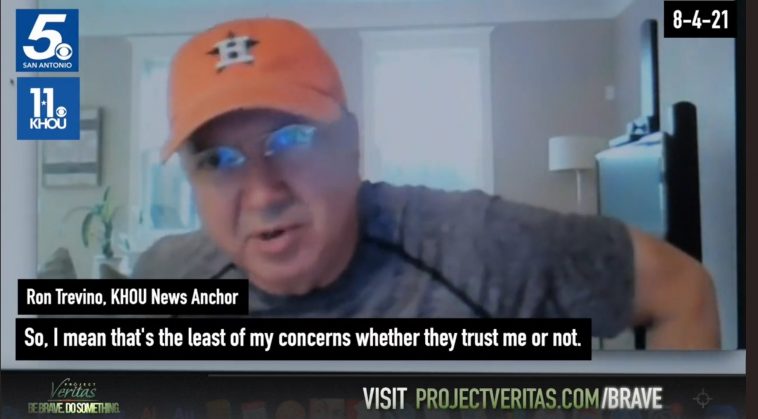 On Tuesday, Project Veritas released its latest video of a whistleblower exposing the mainstream news media’s questionable journalistic ethics within one of the largest media companies in the US.

Former CBS5 San Antonio promotions producer Brett Mauser sat down with James O’Keefe and sounded the alarm over the station’s mandatory diversity and inclusion training that instructs its journalists, producers, editors, and anchors to completely remove objectivity from their news reporting and coverage – so essentially, lie for the sake of the approved narrative and cover up the objective facts along the way – other words – FAKE NEWS.

KENS CBS5 is an affiliate station of CBS that is owned by Tegna Inc, which is one of the nation’s largest media conglomerates that owns 64 local radio and television stations across 51 different markets in the US. They have direct access into about 39% of American households through their vast network, and according to their website, they produce “trusted, impactful, and innovative” content that “helps bring positive change to their communities, but as O’Keefe points out, “changes are going on within Tegna and they aren’t all positive.”

In addition to the woke training documents, Mauser also provided Project Veritas with audio and video recordings of the corporate training personnel, including one in which Tegna’s Chief Diversity Officer Grady Tripp explains that the company will be holding their news stations “accountable” with social justice and equity.

Tripp makes Tegna’s stance clear – reporting the news has nothing to do with the facts. As he puts it, if you are not “looking at videos” that include Marxist propaganda about “equality, social justice, and race” – “you don’t care.”

Mauser explained how the overwhelming assault by corporate to champion this woke ideology has convinced a shocking number of the news staff to buy into the woke virtue signaling, casting aside any modicum of journalistic ethics they may have had in the process.

According to Mauser, “you can’t trust the news” at all – and they don’t even care if you do anyway.

One news anchor who works for Tegna in Houston at KHOU even said that his viewer’s trust is “least of my concerns,” in a recording of a zoom call that was provided by Mauser.

“I don’t really care if people trust us or not, you still got to do your job.

So, I mean that’s the least of my concerns whether they trust me or not.” – Ron Trevino, News Anchor at KHOU.

“I challenge you [journalists] to stop thinking in terms of objective journalism…that’s not really feasible anymore…” #ExposeCBS pic.twitter.com/gtMWlHFaZr

Within minutes of the Project Veritas segment being released, Mauser’s former employer released a statement in a shameless attempt to run damage control.

KENS5 called Mauser’s whistleblower statements a “misunderstanding of what diversity and equity in a newsroom means” and egregiously blamed him, and others like him, for their “lack of understanding” that the station says necessitates this type of woke training in the first place – how convenient.

These people are clowns.