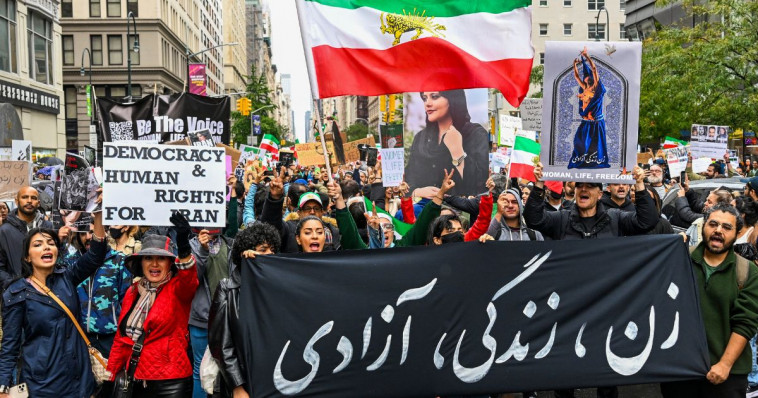 On Sept. 13, 22-year-old Mahsa Amini was arrested by the Iranian morality police after they accused her of not following the laws regarding dress for women.

Amini was visiting Teheran from the Kurdish city of Saqez and pleaded for mercy, not being fully aware of the local regulations. They refused, instead detaining her, loading her into a van and bringing her to a morality police station.

Within just a few hours, an ambulance arrived to transport a now-comatose Amini to the hospital. There, she died after a cycle of resuscitation, and her family was denied access to view her body or her records.

It is not certain what happened to Amini from the time of her arrest to her transport to the hospital. The Iranian authorities are claiming that she had a heart attack, although her family says the 22-year-old had no pre-existing conditions.

And coincidentally — just like in the case of Jeffrey Epstein — the pertinent cameras in both the transport van as well as the detention center were not functioning properly, and the snippets of video that were released are said to have been heavily edited. Sources who claim to have been with Amini in the police van and morality detention center insist that she was beaten and tortured to death.

The population of Iran is outraged, and virulent protests have erupted with a fury that has not been seen for over four decades — since the 1979 Revolution. For many, the focus has been the requirement for all women to wear a hijab head covering, and the apparently draconian — and even deadly — consequences for disobedience.

So far, dozens have been killed, including protesters as well as police officers and allied militia members. Countless others have been injured, and thousands have been arrested. At Sharif University on Monday, unarmed college students were trapped by elite Iranian Revolutionary Guard Corps military personnel on motorbikes and shot to death.

Besides violent suppression, Iran has striven to censor and restrict the communications of its population, even shutting down the internet. In response, Elon Musk has worked to release Starlink over Iran to reinstate internet access. While the intention is good, the practical value of Musk’s gesture has been limited by technical hurdles.

All over the world, people have gathered in solidarity with the oppressed citizens — in particular the women — of Iran. In fact, even in Israel, a women’s protest is scheduled to take place in the heart of Jerusalem. No matter the nationality, no matter the religion, all are in agreement that the tyrannical and murderous Iranian regime must be put in check.

Do you think Biden is enabling the Iranian regime?

The response from the Biden administration and other Western governments, however, has been more murky.

On the surface, the rhetoric takes the form of the usual platitudes of sympathy for the victims and condemnation of the atrocities. National security advisor Jake Sullivan stated that the U.S. “continues to condemn the brutality and the repression against the brave citizens of Iran, the brave women of Iran, who are simply marching for their rights and their dignity and their justice. … We continue to stand with them — not just in word, but in deed.”

But what do the “deeds” of the Biden administration and other Western nations really say?

For starters, both the U.S. and Canada have issued sanctions in response, but not against the murderous government of Iran itself. Rather, only the morality police and other specific entities and individuals have been sanctioned.

Not only is the Biden administration contradicting its rhetoric by refusing to implement the proper sanctions, but the U.S. is reportedly now agreeing to release $7 billion in frozen assets to the Iranian regime in exchange for the release of three American-Iranian dual citizens effectively held as hostages in prison on bogus charges of espionage.

Besides that, Biden has already dramatically boosted the economy of Iran by walking away from former President Donald J. Trump’s policy of strictly enforced sanctions. It is estimated that up to $38 billion has been earned by Iran in oil sales to China since Biden entered the White House.

In other words, in a manner not terribly different from their bolstering of the Taliban in Afghanistan, Biden and his political allies are actively contributing billions of dollars to the oppressive Iranian regime at the very moment it needs it most to ruthlessly murder more of its own civilians — especially women.

Isn’t it funny how Biden and his “woke” Democratic colleagues and followers scream in fury that conservative Americans are hateful bigots for defining the female gender on the basis of anatomy? But according to liberal standards of morality, the empowerment of a murderous regime through cash fluxes of billions of dollars — further enabling it to beat to death, shoot and otherwise kill innocent women for failing to abide by an oppressive dress code — is perfectly acceptable.

This is hardly the first time the Democratic political machine has wasted an enormous opportunity to take action in Iran.

In 2009, then-President Barack Obama did little to nothing to support a wave of protests that erupted when a 26-year-old woman, Neda Agha-Soltan, was shot by a sniper after waves of unrest following a clearly rigged election.

Being engaged in a secret correspondence with Ayatollah Ali Khamenei that ultimately led to the failed nuclear negotiations officially known as the Joint Comprehensive Plan of Action, Obama and the Democrats refused to support the protests seeking to restore election integrity as well as a more moderate regime to Iran.

Obama and Biden preferred back-channel communications and the release of billions of dollars to the monstrous leadership of Iran surging toward nuclear capacity in exchange for… well, in the grand scheme of things, nothing, really.

Unlike his predecessor, Trump was notorious for his strong stand against the Iranians and their ambitions of widespread death.

True, it’s impossible to say what Trump would have done in the present situation if he was still in the White House. But I think it’s safe to say that — unlike Biden — the eliminator of the world’s most dangerous terrorist and the second most powerful man in Iran, Gen. Qassem Soleimani, would have responded in a way that was both decisive and effective.

And Trump’s continued economic stranglehold on the Iranian government just might have enabled a swift regime change to something more moderate and — most importantly of all — less ambitious for nuclear weapons.

Only time will tell what results will arise from Biden and the Democrats’ brazen enabling of the evil leadership of Iran. But the potential consequences range from more murder of innocent civilians to scenarios far more deadly and catastrophic.

Ben Kerido is an American-Israeli special forces operator and former U.S. Department of Defense contractor focusing on psychological warfare training and now serving in the Israel Defense Force reserves. He and his wife Sarai live in Jerusalem and are writers for Intrepid Tower Publishing and hosts of the “From Israel with Love” podcast. They are also the authors of five books, including “The American Holocaust: Early Tomorrow Morning,” an Orwell-style thriller and satirical parody of the American and Middle Eastern political and military arenas.