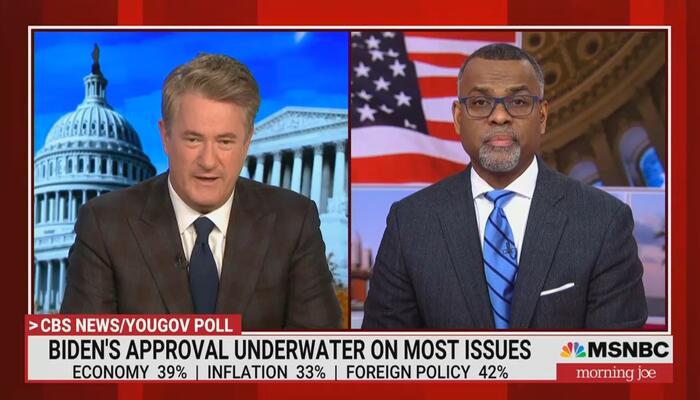 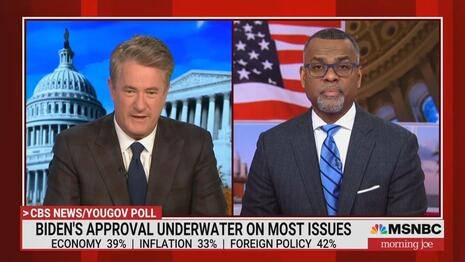 Democrats are filled with fear as they view the ominous writing on the wall of losing big in the midterms, and then in 2024 as well. Biden’s poll numbers are in the dumpster, and the ratings of pinch-hitter Harris are even worse. Every day brings news of yet another Democrat congressman choosing retirement over the prospect of returning to the minority.

But not to worry: Morning Joe is riding to the rescue to lift Democrat spirits! Remember the show that always thought Trump’s political demise was right around the corner? On Monday, the panel went out of its way to praise Nancy Pelosi as one of the “most successful” Speakers ever. Never mind she keeps losing her majority.

And Biden’s catastrophic poll numbers? Happy days will soon be here again, assures the Morning Joe panel. Jonathan Lemire passes along happy talk from his White House pals —  I mean, sources — claiming that they’ve “turned the corner.” And Joe Scarborough says that inflation and Covid-cases will “wash out,” and that when they do, that Biden’s numbers will rebound across a panoply of metrics: inflation, the economy, and support among blacks, Hispanics, and Democrats.

Scarborough confidently predicted that by the time elections come around, all the traditional sectors of the Democrat base will return to the fold.

Note that much of Morning Joe‘s optimism was based on the passage and success of the massive “Build Back Better” spending extravaganza. It’s like cheering on the home team for being ahead at halftime. It’s like praising Nancy Pelosi for passing “cap and trade” pollution regulations back in the Obama years. The Senate never moved on it. It didn’t happen.

So move over, Pangloss! You’re just a dour pessimist compared to the optimists at Morning Joe!

MIKA BRZEZINSKI: Now to this new polling has President Biden’s approval rating at 44%. That is from the latest CBS/YouGov poll, which is slightly higher than some other recent surveys, though still a six-point drop from when the same poll was conducted last month . . . But now the president has his Build Back Better bill, the sweeping social spending package to run on, which passed in the House on Friday

SCARBOROUGH: Certainly, you look at her resume of what she’s been able to shepherd through the House. And I heard from one cynic after another, this was never going to happen.

But let’s just start with Nancy Pelosi. She obviously ranks up there legislatively as one of the most successful Speaker of all time, doesn’t she?

KATTY KAY: Yeah, I remember after the Affordable Care Act passed, thinking that Barack Obama owed Nancy Pelosi flowers for the rest of her life. And I think Joe Biden probably joins that flower-gifting session by Pelosi’s ability to get the votes.

JONATHAN LEMIRE: The White House believes, after a real summer slump that extended into the fall that it has had turned the corner. The White House aides that I’ve talked in the last few days believe that this is a turning point for the administration; that Friday was a huge deal, to get this done through the House. They acknowledge, there’s still a ways to go in the Senate . . .

But the White House believes they have momentum. The believe that those poll numbers will go up again.

SCARBOROUGH: On inflation, his numbers are at 33%. They’ll stay there until inflation washes out over the next six to nine months, which it should do. The same thing with the economy. I suspect that when those Covid cases wash out, those numbers will go back up again.

SCARBOROUGH: You see numbers down among black Americans, see them down among Hispanic Americans, you see him down among Democrats: he’s at 80% instead of 88, 89, 90%, where he normally would be. I suspect some of those numbers are going to tick back up when Build Back Better becomes law. But again, those are numbers that will go back to Biden or a Democrat as elections come up.