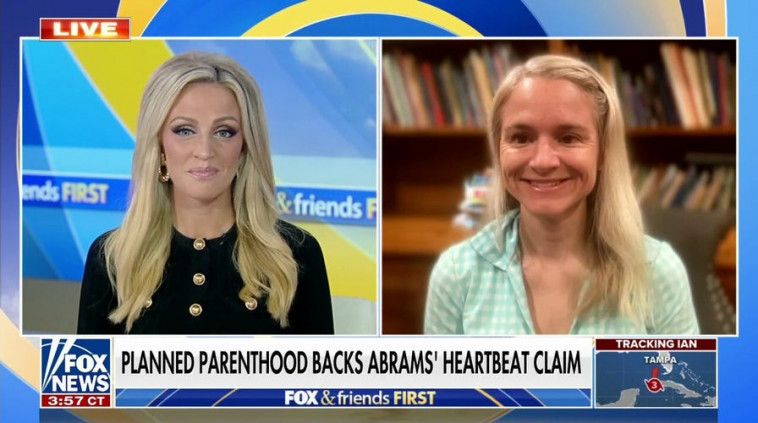 Planned Parenthood is facing scrutiny after it redefined fetal heartbeat on its website following Stacey Abrams’ controversial remarks suggesting it is a “manufactured sound.”

Pediatrician Kathleen Berchelmann joined “Fox & Friends First” Tuesday to discuss why she believes this is a political ploy to “redefine” medical language to suit a political agenda.

“I think this is just the oldest trick in the book… in the pro-choice advocacy side, which is to redefine medical language,” Berchelmann told co-host Carley Shimkus. “Years ago, they redefined a pregnancy from conception to implantation in the uterus, and now they’re redefining heartbeat versus cardiac activity.”

“The problem here is that every American that’s had that experience that you just described, that miraculous experience, where you go in for that first visit, and you see that tiny flutter, and you see it on the screen, you know there’s a real life there,” she continued. “There’s a real heartbeat there.”

Planned Parenthood has since altered the verbiage on its website, appearing to back Abrams’ claims.

The change reads, “A part of the embryo starts to show cardiac activity. It sounds like a heartbeat on an ultrasound, but it’s not a fully-formed heart – it’s the earliest stage of the heart developing.”

The modification comes after the Georgia gubernatorial candidate suggested the six-week heartbeat is male-motivated ploy for control over female bodies during a speaking engagement this month.

Abrams said, “There is no such thing as a heartbeat at six weeks. It is a manufactured sound designed to convince people that men have the right to take control of a woman’s body.”

But critics, including Berchelmann, have defied her claims. Berchelmann said Abrams and others are trying to change current definitions in modern-day medicine.

“That movement makes sound, even if it’s very small, which… it can be amplified using an ultrasound machine,” Berchelmann said. “So to call it anything other than a heartbeat and call it cardiac activity is just… wordsmithing and changing definitions.”

Bailee Hill is an associate editor with Fox News Digital.