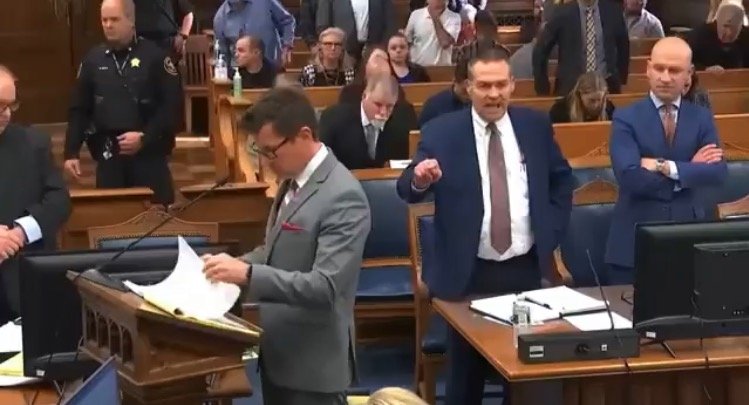 A New York Times reporter covering the Kyle Rittenhouse murder trial in Kenosha, Wisconsin reported he overheard jurors commenting on the stress of deliberating the case as they entered the courtroom Friday morning for their fourth day of deliberations. The jury has not been sequestered. Kyle Rittenhouse and his attorneys stand at the end of the third day of jury deliberations, screen image.

Nicholas Bogel-Burroughs posted to the Times’ live blog about what he heard the jurors say:

“Jurors have entered the Kenosha courthouse for the fourth day of deliberations, after discussing the case for 23 hours over the previous three days. As jurors entered, several of them thanked sheriff’s deputies for putting up a folding screen that blocked them from public view. “It helps calm my nerves,” one woman said. Another woman could be heard saying the “media coverage is insane,” and a man said he woke up at 3:30 a.m. and couldn’t fall back asleep until 5 a.m.”

Everyone following the Kyle Rittenhouse trial is reading tea leaves as the jurors enter their 24th hour of deliberations.

Here’s what I heard from the other side of a screen as jurors walked into the courthouse in Kenosha just now: https://t.co/dXEDuCaNbd pic.twitter.com/FsH4mXeNxH

Yesterday Judge Bruce Schroeder banned MSNBC from the courthouse after a freelancer with the network was caught following the vehicle carrying the jurors Wednesday night.

BREAKING: Judge Schroeder bans MSNBC from the Rittenhouse trial after a possible doxxing attempt by a crazy producer, James G. Morrison, was caught following the jury bus transporting them away from the courthouse. Morrison blew through a red light trying to keep up with the bus. pic.twitter.com/Q0v9smBCgr

Daily protests outside the courthouse have turned violent with arrests made amid concerns that the jurors can hear the protesters inside the jury room.

MULTIPLE ARRESTS IN KENOSHA: BLM Protesters clashed with Pro-Rittenhouse protester on the steps, one journalist got punched and two blm protesters were arrested across the street. #HappeningNow #RittenhouseTrial #Rittenhouse pic.twitter.com/CWjTZvxN8z

Sean Hannity fearmongers that left-wing protesters are intimidating the Rittenhouse jurors, because they can purportedly hear their chants — while Fox shows video of pro-Rittenhouse protesters doing the same thing. lol pic.twitter.com/RzH4ZfRDQm

Jurors were given permission by the judge to take home copies of the 36 page jury instructions last night.