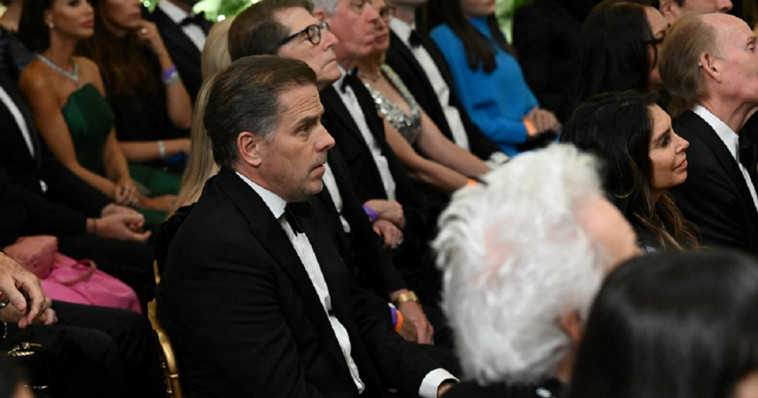 President Joe Biden hosted a swanky White House event on Sunday evening to acknowledge Kennedy Center honorees. Still, the attention of reporters was immediately pulled away when they noticed who else was in the room.

According to the Washington Examiner, first son Hunter Biden was spotted with his wife, Melissa Cohen Biden, seated near the back of the room for the event. Given Friday evening’s “Twitter Files” document dump that revealed proof of Twitter working with Democratic operatives to suppress the story of Hunter Biden’s laptop just before the 2020 election, some White House press pool reporters weren’t going to let an opportunity pass.

As Biden mingled with the crowd, he was approached by two pool reporters who couldn’t resist the urge to get what would have been a diamond of a story about his thoughts about the Twitter Files situation.

The first journalist reportedly asked Hunter Biden about Twitter owner Elon Musk revealing the internal communications from the social media giant that show collusion between the Biden campaign and Twitter executives in the lead-up to the 2020 election.

The other reporter queried the president’s embattled son on the news that Republicans aim to launch multiple investigations into the Biden family when they assume majority House control in the 118th Congress.

The reporters failed to catch a lucky break on what would have likely been a controversial take, as Hunter Biden reportedly smiled and walked away from them without saying a word.

“Pool had a chance to ask Hunter a question (he was seated near the back with Melissa Cohen). He smiled and walked away to two simultaneous questions about GOP investigations and Elon Musk maneuvers,” Mediaite quoted pool reporter Geoff Earle of MailOnline as noting.

Even with the star power in the room, Hunter Biden’s appearance was a show-stopper.

The Hunter Biden laptop story saw a strong renewal of interest over the weekend after Musk delivered on his promise to begin releasing thousands of internal Twitter documents that detailed how the social media platform, under its previous ownership, worked hand-in-hand with high-level Democratic operatives to suppress potentially harmful news about the family of then-candidate Joe Biden.

Should there be a major investigation into the Bidens’ business dealings?

Musk chose independent Substack journalist Matt Taibbi to report on the findings from the data, which is likely to take weeks to uncover fully. His first trove of discoveries detailed the chaotic process that reportedly unfolded as Twitter executives determined how to justify suppressing and ultimately completely blocking the New York Post’s reporting on the laptop.

“Twitter took extraordinary steps to suppress the story, removing links and posting warnings that it may be ‘unsafe.’ They even blocked its transmission via direct message, a tool hitherto reserved for extreme cases, e.g. child pornography,” Taibbi reported in one of the dozens of tweets he published Friday night.

18. Twitter took extraordinary steps to suppress the story, removing links and posting warnings that it may be “unsafe.” They even blocked its transmission via direct message, a tool hitherto reserved for extreme cases, e.g. child pornography.

Hunter Biden has been under federal investigation since 2018 for matters concerning his tax affairs and dealings with a long list of foreign nations while his father was the vice president.

It remains to be seen whether President Biden’s Justice Department will announce further action on the Hunter Biden investigation.

According to The Washington Post, Delaware U.S. Attorney David Weiss has the power to decide whether to pursue tax-related charges and charges related to a false statement the president’s son allegedly made on a background check form to purchase a firearm.

Ryan Ledendecker is a freelance journalist and writer. He began reporting news and writing commentary during the 2014 Ferguson riots. Prior to that, he worked as a web editor and columnist for an award-winning local newspaper.

Ryan Ledendecker is a freelance writer covering politics and breaking news. He previously worked as a columnist and web editor for an award-winning local newspaper. When he’s not writing, he’s honing his competitive BBQ skills. You can find him on Twitter, Facebook, and Truth Social.

Have the feeling Hunter is going to be hanging around Sleepy Joe and at the White House more to kiss his father’s ass.