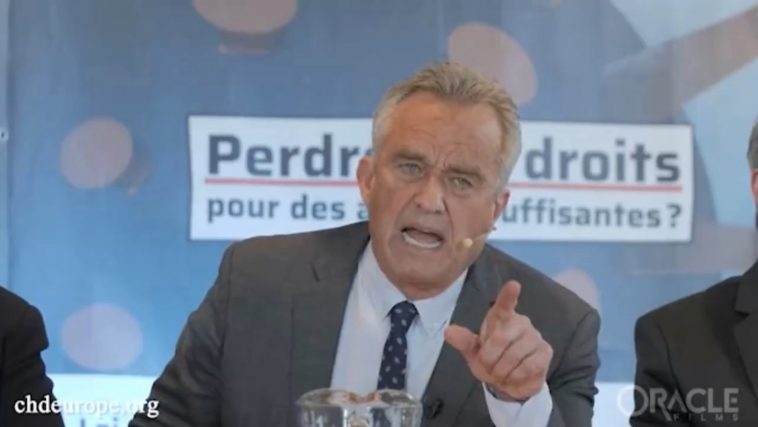 Earlier this week, Democrat Robert F. Kennedy Jr. spoke out against authoritarian covid measures at a protest in Switzerland. He spoke alongside a panel of local leaders and called for citizens to resist mandates as thousands gathered outside the building, standing together for their freedom.

Switzerland is set to hold a public vote at the end of this month to decide whether the government’s newly proposed Covid laws can go into effect. If they are enacted, then Switzerland would adopt many of the restrictions that have been imposed throughout the EU, even though the country has navigated through the pandemic very successfully with limited mandates to this point.

Speakers at the event urged the people to reject the proposal in order to hold the line that protects democracy for the entire world – as Kennedy put it to the crowd – right now, Switzerland is Europe’s “last bastion of freedom.”

Local MP Urs Hans even exclaimed to the crowd: “There has NEVER been a pandemic;” to which they feverishly responded with chants of “FREEDOM.”

In one part of Kennedy’s speech, he takes direct aim at the Left’s completely bogus “Covid misinformation” narrative, which he says is being pushed by “government officials who are colluding with tech “titans” to engineer “the destruction of our democracy and civil rights.”

“When they use the term ‘vaccine misinformation,’ they are using it as a euphemism for any statement that departs from official government policies and pharmacutical industry profit taking.

It [misinformation] has nothing to do with whether its true or false, it only has to do with what the political implications are.

And who is doing this censorship? It’s government officials in league with Bill Gates – with Larry Ellison – with Mark Zukerberg – with Sergey Brin from Google – and with all of these internet titans.”

Kennedy then points out that it’s obviously not a coincidence that companies like Facebook, Google, and Twitter are the ones censoring criticism of the government policies that are making them rich. The Fauci-funded China pandemic has resulted in the greatest mass transfer of wealth to a small handful of individuals in human history.

Over $3.2 TRILLION has shifted into the net worth of the uber-wealthy – directly coming out of the working class – which has resulted in approximately 500 new billionaires since the beginning of last year.