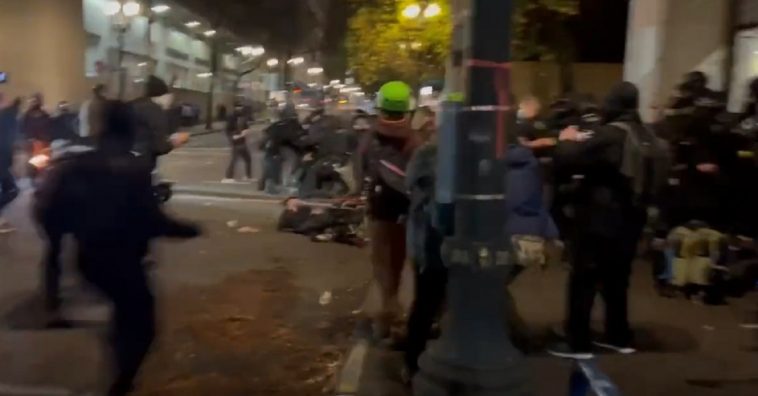 A group of domestic terrorists threw rocks at cops and damaged property in Portland, Oregon on Friday night while protesting the acquittal of Kyle Rittenhouse, prompting police to declare a riot in the city.

A crowd has gathered near SE 2nd Avenue and SE Madison Street and participants have begun breaking windows and damaging doors of city facilities in the area. People are throwing objects at police officers in the area.

The rioters threatened to set Portland’s Justice center on fire, a building currently used as the Portland Police Bureau’s headquarters and house a county jail and courtroom.

A squadron of armed police officers are seen retreating to a garage for safety while the domestic terrorists swarm them, in footage documenting the riot.

Cops retreat in the face of black block in Portland Or pic.twitter.com/lcdBnO0q4A

Portland police have declared a riot tonight after demonstrators gathered downtown to protest the verdict in the Kyle Rittenhouse trial pic.twitter.com/7OBjgFvkbo

Another video shows the shattered windows of the Multnomah County Office building smashed by the anarchist mob.

A large group of protesters circles around the JC, a cop’s tail light is smashed, a smoking trash can, a broken window or two. Mostly people milling around chanting “all cops are bastards” or some variation. pic.twitter.com/nBXRHt4Z5x

It was not clear if any arrests had been made late Friday.

Meanwhile, according to Biden’s Justice Department, law-abiding Americans who oppose Covid measures and believe that Joe Biden is illegitimately occupying the White House are “terror threats.”

Under the two-tiered justice system, leftwing rioters burn down government buildings and attack police regularly with little or no repercussion while patriots who protested the stolen election on Jan. 6 —some who stood in the Capitol building for just minutes as federal agents held the doors open–  have been languishing in a DC jail for months where they are segregated and subject to torture.