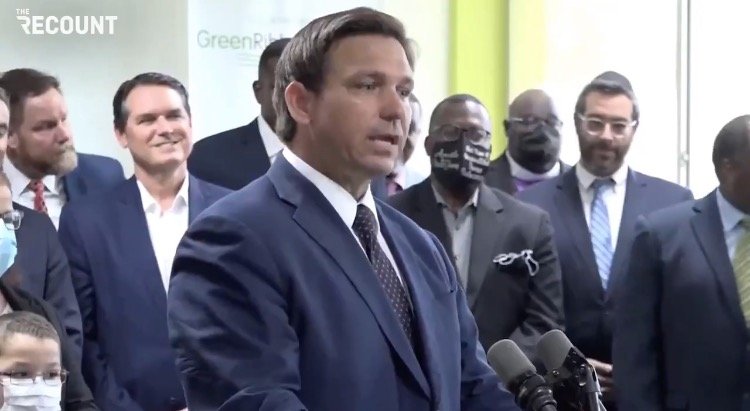 Governor Ron DeSantis got it right.

Eighteen days ago, I called on Governor Ron DeSantis regarding three major issues facing the state of Florida and expressed the possibility that I would challenge him as the Libertarian Party candidate for Governor if his actual policies did not come in line with his high-flying conservative rhetoric and if he did not commit not to pursue a Presidential candidacy in the event that Donald Trump, to whom he owes his nomination and election, decides to run. I am happy to say the Governor has responded positively…

While I understand that many conservatives, Republicans, and Trump Supporters were displeased by my public criticism of Florida’s Governor, my reasons are plainly stated, and I can report that the Governor has responded by shifting his positions on issues important to the conservative base.

In fact, I have proven successful as a catalyst for actual results on the important public policy issues that I care about, and I reiterate my belief that the Governor should put his Presidential ambitions on hold until President Trump decides whether or not he wants to run in 2024.

To be specific, I asserted my belief that there are as many as 1.6 million phantom voters in Florida’s voter rolls based on an actual canvas of 10,000 Florida “voters” who voted with mail-in-ballots in the 2020 election by Defend Florida, a grassroots election integrity organization. These actual visits to the addresses where voters were registered yielded 10% who were either deceased, had moved out of state, were registered at a non-residential or simply never existed to begin with.

While PolitiFact, and CBS-Miami were quick to try to dispel my assertion as “false”, the law of mathematical probability supports my conclusion that an extrapolation over the broader number of voters who voted by mail-in-ballots would yield 1.6 million phantom voters. Continuing to carry these registrations on the voter rolls is extraordinarily dangerous because these “phantom voters” could provide the basis for massive voter fraud in 2022 when the statewide elections will prove to be exceedingly competitive and close.

Within 24 hours, Governor Ron DeSantis announced the creation of a special election integrity unit of the Florida state government that would investigate and prosecute voter fraud, presumably including those who cast ballots but are not legitimately registered voters.

I also called out Governor Ron DeSantis, who got big applause at a recent 2024 Presidential Cattle Call in Las Vegas, when he proudly touted his “mask mandate ban” when in fact his legal ban on the mandatory wearing of masks in public schools was being actively thwarted in ten of the largest counties in Florida. The Governor’s response to these illegal mask mandates had previously been to financially fine the counties. Since these fines were simply being passed on to the Biden Administration to pay because the elementary and middle school children in the largest counties in the state were still being required to wear masks, the Governor’s claim rang hollow. Counties defying the Governor’s ban on mask mandates include Lake County- 42,000 students, Polk- 106,000 students, Volusia-61,400 students, Lee-90,000 students, Orange- 206,000 students, Miami-Dade- 347,300 students, Hillsborough- 223,300 students, Palm Beach- 176,700 students, Broward- 261,000 students, Duval- 129,000 students. In other words, an estimated 1,642,700 estimated students were still required to wear masks.

I also pointed out that Broward County Sheriff Gregory Tony, who the Fort Lauderdale Sun Sentinel Newspaper correctly reported was both a murderer and a drug dealer in Philadelphia, had been appointed to the Sheriff’s Office by Governor Ron DeSantis and that, even though he is fully aware of the Sheriffs past DeSantis had not removed him which the Governor has the full authority to do. Then the Governor quickly signed a secret executive order transferring jurisdiction regarding the investigation of Sheriff Tony’s lies to The Florida Department of Law Enforcement from the Left-wing Broward County’s State’s Attorney who simply refuses to prosecute the Sheriff to the States Attorney in Fort Myers who presumably has no qualms about removing a sheriff who is both unqualified and who defrauded the public through his lies.

I freely admit that I’d be outraged if Governor Ron DeSantis were to utilize his presumed 2022 reelection to use Florida’s Governorship as a stepping stone for a 2024 Presidential bid regardless of whether former President Donald Trump runs again in 2024 or not. Given the fact that DeSantis was elevated from being a relatively unknown backbench Republican Congressman to the Republican nomination for Governor via the endorsement of Donald Trump and the fact that President Trump had to visit Florida twice in the last two weeks of the Florida 2018 election, to drag DeSantis as well as the U.S. Senator Rick Scott over the finish line, I find the Governors lack of gratitude and loyalty to Donald J. Trump to be disloyal.

The Fort Lauderdale Sun Sentinel newspaper, arguably the worst newspaper on the face of the earth, essentially written by elitist snobs, who don’t know their ass from their elbow, grudgingly admitted that an independent candidacy by me would cross pressure the Governor most effectively. Some have argued that my current Republican registration would legally bar me from an independent gubernatorial candidacy. In fact, I have no illusions about my electability as a candidate for Governor and raised the possibility only to demonstrate that I mean business when it comes to the future of my home state.

The Fort Lauderdale Sun Sentinel stated in their editorial “Everybody has heard of Roger Stone. He would give DeSantis and Republicans a lot of headaches. Is Stone bluffing? No, he says. But whether you like or detest him, he should not be barred from running for office by political trickery or excessive legal barriers, and besides, the idea of Stone lobbing grenades at DeSantis all along the campaign trail through next November has a bizarre appeal. Run, Roger, Run.” I am proud to accept the endorsement of the Fort Lauderdale Sun Sentinel but I am prouder that I have successfully nudged the Governor to fulfill his promises to the people of Florida.

The Governor’s immediate shift in public policy to address the flaws in his policies regarding election integrity, his mask mandate ban, as well as the epically corrupt Broward County Sheriff that he appointed, is most satisfying. What Governor DeSantis may not fully understand is that he will face an extraordinarily competitive race in reelection and that without the enthusiastic support and campaigning of Donald Trump, his chances of reelection are limited.

(You can help Roger Stone with his legal costs related to the government’s latest attacks at Roger Stone Legal Defense Fund (stonedefensefund.com)