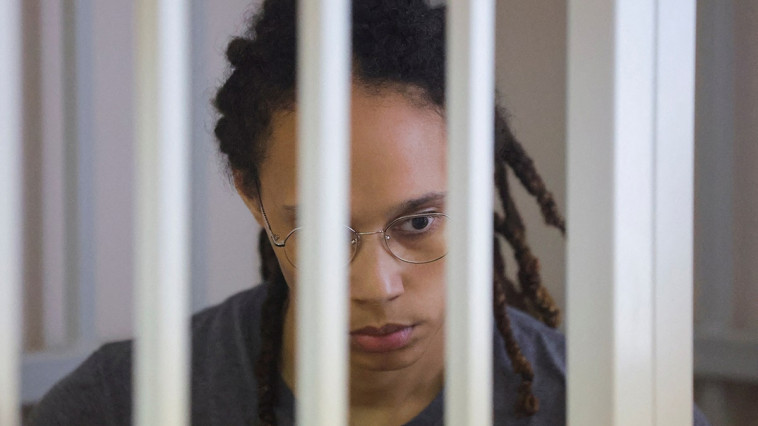 State Department spokesman Ned Price says the Russian government failed to inform the White House of Brittney Griner’s transfer to a penal colony last week and has yet to engage in talks regarding the release of the WNBA star and former U.S. Marine Paul Whelan “with the seriousness of purpose.”

During a press conference on Thursday, Price was asked to elaborate on President Biden’s remarks from a day earlier when he said he was hopeful that Russia would be more willing to discuss Griner’s release now that the midterm elections are over.

WNBA star and two-time Olympic gold medalist Brittney Griner stands inside a defendant’s cage in a courtroom in Khimki, Russia, just outside Moscow, on Aug. 4, 2022. (Evgenia Novozhenina/Pool Photo via AP)

“Well, the fact is and what the president was alluding to, is the fact that the Russians up until now have not engaged with the seriousness of purpose in the constructive approach that we would have liked to have seen. We put forward this substantial proposal, as Secretary [of State Antony] Blinken announced a number of months ago now, for the release of Paul Whelan and Brittney Griner,” Price said.

He continued: “The fact that Paul Whelan and Brittney Griner remain behind bars — Brittney Griner for some 10 months now, Paul Whelan for more than three years now — is a testament to the fact that this process has not moved as quickly as we would have liked. You’ve heard us say that from our end. This process has not been static. We put forward this substantial proposal. We’ve had discussions with the Russians. Those discussions are continuing. We’re continuing to look for ways that we can secure as quickly as possible the release of Paul Whelan and Brittney Griner, so that they can be returned to their loved ones here in the United States.”

Price declined to comment further on the president’s midterm elections remarks, but added that the U.S. has continued “to press (the Russians) to engage seriously and in good faith on the original proposal that we put forward.”

WNBA star and two-time Olympic gold medalist Brittney Griner is escorted from a courtroom after a hearing in Khimki, Russia, just outside Moscow, on Aug. 4, 2022. (AP Photo/Alexander Zemlianichenko)

According to Griner’s attorneys, she left a detention center outside of Moscow on Friday, but her exact location is unknown. According to The Associated Press, transfers to penal colonies, usually in remote parts of Russia, can take days or even weeks with limited to no contact.

Griner was arrested by Russian law enforcement at Moscow’s Sheremetyevo International Airport on Feb. 17 for illegal possession of cannabis. She was found guilty in a Russian court on Aug. 4 and sentenced to nine years in prison.

Price said Thursday that the White House was not informed of Griner’s transfer.

“It has, unfortunately, become standard practice on the part of the Russian Federation not to inform us ahead of time when… American citizen detainees are transferred from one detention center to another… We did not receive a heads-up. Ultimately, we had seen press reports, and we engage very closely with Brittney Griner’s representatives, and we continue to do that. As soon as we learned of her transfer, we requested formally from the Russian government, we requested more information about her transfer,” he said.

Brittney Griner, who was detained at Moscow’s Sheremetyevo airport and later charged with illegal possession of cannabis, sits inside a defendant’s cage in a courtroom in Khimki, Russia, just outside Moscow, on Aug. 4, 2022. (Reuters/Evgenia Novozhenina/Pool)

“We are also engaging to do all that we can to ensure that her conditions are as safe, as healthy as can be during this time. That is something that we do for all detained American citizens in Russia and really around the world.”

Russia has continued to caution the U.S. to conduct all prisoner swap negotiations “in silence under a tight lid on any information.”

The state department should know that Russia doesn’t have to alert or tell them anything. Insane Biden should also shut the fuck up.

Last edited 16 days ago by Patti
0