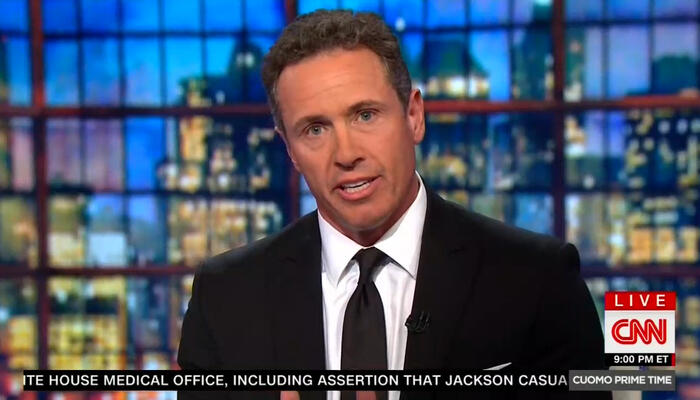 In another case of Zuckerville (aka CNN) living in an alternative reality, CNN’s chief Zucker bootlickers and Reliable Sources host Brian Stelter claimed in his Wednesday newsletter of hate that November ratings showed suspended Prime Time host Chris “Fredo” Cuomo had the network’s highest-rated show among total viewers. But like most things with CNN, that wasn’t true.

>> November’s cable news #’s came out on Wednesday, and “Cuomo Prime Time” was the network’s #1 show of the month among total viewers. The original series “This is Life with Lisa Ling” and “Diana” ranked #1 ranked #1 in the 25-54 demographic…

If you go look at what the actual adults are reporting at places such as TVNewser (which Stelter founded) or our friend RoadMN, the facts showed Cuomo Prime Time was second in total viewers for CNN shows. Worse yet, he was fourth in the 25-54 demographic.

Both showed that Nielsen Media Research numbers for November pegged Cuomo Prime Time at 774,000 total views, which basic math would show was less than the 786,000 viewers for Anderson Cooper 360.

Putting those two numbers in perspective, they were the 24th and 25th most-watched weekday shows in cable news, which put them behind 15 of the 16 weekday shows on the Fox News Channel (and ahead of only Fox & Friends First, which airs from 4:00 a.m. to 6:00 a.m. Eastern).

The Wrap reported that, even before October, Cuomo had been on a ratings slide:

Another factor for CNN to consider is the erosion in Coumo’s popularity as this scandal has dragged on. Since Andrew Cuomo resigned as New York’s governor in August, Chris Cuomo has also seen a steady slide in viewership. “Cuomo Prime Time” had its lowest-rated month ever in total viewers November, according to Nielsen Media Research ratings data. The program averaged a total of 774,000 viewers in November, of whom 170,000 were in the advertiser-coveted 25 to 54 age demographic.

By comparison, MSNBC’s “The Rachel Maddow Show” brought in a total average of 1.981 million viewers, with an average of 260,000 in the demo. Cuomo, who had spent much of this year as CNN’s highest-rated primetime anchor, was also bested by “Anderson Cooper 360” last month.

Ironically, Stelter spilled plenty of ink in his newsletter defending the Biden administration as doing their best amidst a pandemic and receiving little credit for it as well as a large section denouncing “the Fox distortion field.”