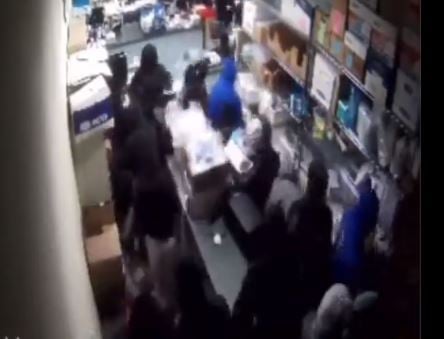 It’s not just Nordstrom’s, jewelry stores, and Lululemon, organized youth mobs are looting all kinds of businesses in the San Francisco-Oakland area.

An organized mob of youths stormed a Wellspring pharmacy and looted all of the medications this past weekend.

And youths hit a clothing store called Prime in downtown Oakland this week – for the second time this month.

The problem is now so bad that Bay Area officials are springing into action.
The local officials have decided not to call the organized robberies “looting” because that might be racist.

Get out while you still can.

We saw similar crimes happen in the wake of the George Floyd protests, but are the past weekend’s crimes truly considered looting?

…”We are talking about two incidents, we’re not going to call this looting. This is organized robbery. That’s what it is,” said Sergeant Christian Camarillo, public information officer for San Jose Police.

Camarillo was referring to the $40,000 in merchandise stolen from Lululemon in Santana Row Saturday.

But according to the California Penal Code, what we saw was not looting.

The penal code defines looting as “theft or burglary…during a ‘state of emergency’, ‘local emergency’, or ‘evacuation order’ resulting from an earthquake, fire, flood, riot or other natural or manmade disaster.”

To some, the distinction may be small, but Lorenzo Boyd, PhD, Professor of Criminal Justice & Community Policing at the University of New Haven, and a retired veteran police officer, emphasized that words matter.

“Looting is a term that we typically use when people of color or urban dwellers are doing something. We tend not to use that term for other people when they do the exact same thing,” said Boyd.