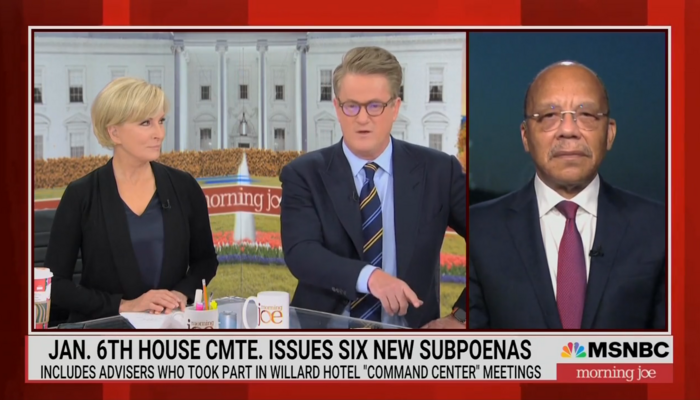 Will Jeff Bezos proclaim himself “President of Prime America?” Or will it be Elon Musk, issuing an edict anointing himself “Emperor of Teslamerica?”

Morning Joe was baying for Steve Bannon’s blood this morning, demanding that the Justice Department prosecute him after the House held him in criminal contempt for refusing to testify before the January 6th committee.

Joe Scarborough took things to an outlandish extreme, predicting this dire consequence if the DoJ doesn’t prosecute Bannon and other Trump allies who might refuse to comply with congressional subpoenas to testify:

“I swear to God: 10, 15 years from now, if people get away with this now, we’re going to be seeing some independent billionaire, that in between flying like rocket ships to Mars, is going to decide to take over this country.”

Of course, we all remember how the liberal media was outraged when Obama’s Justice Department declined to prosecute Obama’s Attorney General, Eric Holder, after the House found him in contempt. Holder had refused to testify about the disastrous Operation Fast and Furious, in which the ATF encouraged arms dealers to sell weapons that wound up in the hands of Mexican drug cartels.

Oh, wait: no wailing from the likes of Scarborough & Co. in Holder’s case about the coming end of democracy and the seizing of the government by a power-mad billionaire. Huh. Wonder why?

Interestingly, Eugene Robinson nodded his head and uttered a “yeah” in agreement with Scarborough’s alarmist spiel. But wait: Robinson works for one of those scary billionaires who might take over the government—Jeff “Democracy Dies in Darkness” Bezos, owner of Robinson’s employer, The Washington Post!

Joe Scarborough predicting that a billionaire would take over the government if Steve Bannon and other Trump allies aren’t prosecuted for refusing to testify before the House January 6th committee was sponsored in part by General Motors, maker of OnStar, Liberty Mutual, and Xfinity.

MIKA BRZEZINSKI: The January 6th committee previously issued subpoenas for top Trump advisers, including Steve Bannon, who the Hhouse voted to hold in contempt after he refused to testify.

The decision whether to bring charges against Bannon sits with Attorney General Merrick Garland.

JONATHAN LEMIRE: There is a real concern about what happens with Steve Bannon. Will the Department of Justice move to charge him criminally? And if not, what teeth does this probe really have —

LEMIRE: What compulsion do people have to cooperate?

SCARBOROUGH: They have absolutely none. Either Congress has the power to subpoena or they don’t. And I’m a little bit confused by exactly what Merrick Garland is doing when it comes to looking to previous administrations. I don’t want them to be politically persecuted because of their views. But if you’re trying to overthrow the federal government. If you’re committing sedition, it’s okay to actually enforce the law. And that’s what I don’t understand.

This is a Madisonian democracy issue . . . I swear to God: 10, 15 years from now, if people get away with this now, we’re going to be seeing some independent billionaire, that in between flying like rocket ships to Mars —

SCARBOROUGH: — is going to decide to take over this country, and they’re going to use these precedents against all of us: Republicans, Democrats, liberals,  conservatives alike.