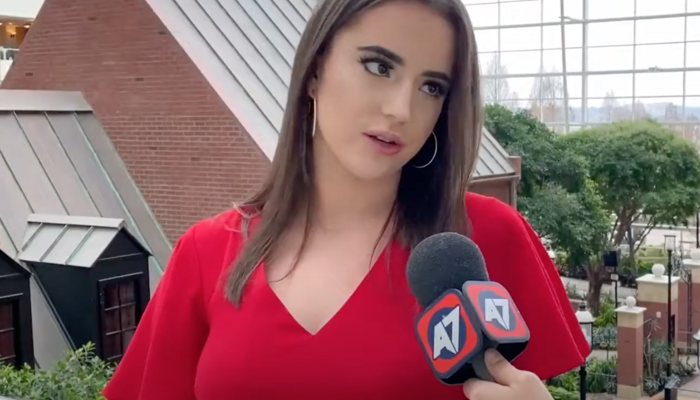 Big Tech and the media have gone to great lengths to hide the ongoing trial of American teenager Kyle Rittenhouse. St. Clair said her video on Instagram was among the videos censored. “Instagram removed the video I posted of Kyle Rittenhouse crying,” St. Clair explained in a Nov. 10 tweet. “It apparently violates their guidelines on *squints* violence & dangerous organizations. Give me a break!” She posted a purported screenshot from Instagram that read: “Your post has been removed” because “[i]t goes against our Community Guidelines on violence or dangerous organizations.”

Rittenhouse was “accused of killing two people and wounding a third during a protest over police brutality in Kenosha, last year,” Fox News reported.

St. Clair’s post in the screenshot showed imagery of Rittenhouse along with her own caption:

“I STAND WITH KYLE RITTENHOUSE. Kyle Rittenhouse is very clearly suffering from PTSD. The vile comments about him faking it are the same type of comments used to invalidate victims of secual assault & other traumas. It’s aggressor-enabling rhetoric.”

Instagram cracked down on St. Clair on Nov. 21, 2020 for posting a photo with a gun after hog hunting. Screenshots shared by St. Clair indicated that Instagram had removed her photo for alleged “coordinating harm or promoting crime” and “violence and incitement.” St. Clair’s instagram story reporting was then “removed for coordinating harm or promoting crime.” If that weren’t enough, she announced that “Instagram has banned me from doing livestreams as well.”

More recently, Big Tech has aggressively censored material that could be construed as sympathetic to Rittenhouse’s plight.

Facebook won’t allow users to search “Kyle Rittenhouse” in the search bar, and even Google is suppressing certain articles — the articles that show Rittenhouse’s side.

Louder with Crowder host Steven Crowder and The Daily Wire shared footage of the evening of the riot as well as trial footage to separate YouTube channels. YouTube placed an age restriction notice before the video, yet did not censor The New York Times or The Washington Post for posting the same footage.

The MRC CensorTrack website now has more than 45 entries of censorship concerning Rittenhouse.

Conservatives are under attack. Contact Instagram at 650-543-4800 and demand that Big Tech be held to account to mirror the First Amendment while providing transparency, clarity on “hate speech” and equal footing for conservatives. If you have been censored, contact us at the Media Research Center contact form to help us hold Big Tech accountable.