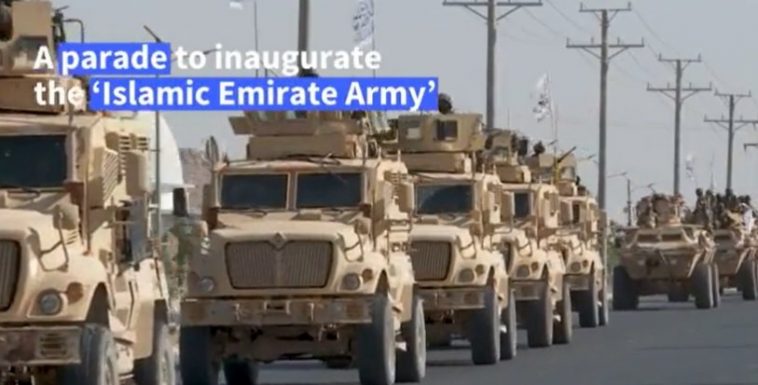 Biden could not do any worse than he currently is doing to destroy the US.  Having a Taliban parade with US vehicles and helicopters handed over to them by Biden days before Veterans Day is simply horrible.

The Taliban held a military parade with US vehicles and helicopters given to them by the Biden/Obama Administration.

This would never have happened under any other President in US history.

#Taliban release video of their military parade in Kandahar, #Afghanistan‘s second largest city and the Islamist group’s birthplace. Military vehicles and helicopters of former Afghan as well as US-led foreign troops were used in the event. pic.twitter.com/slriGBko9F

The Taliban held a military parade for its “Islamic Emirate Army” in the city of Kandahar on Monday, featuring U.S.-made weapons, armored fighting vehicles, and helicopters seized after President Joe Biden’s disastrous withdrawal from Afghanistan.

The Kandahar parade was the public debut of the rebranded Taliban military. All eight of Afghanistan’s military corps were renamed by the decree of Taliban Defense Minister Yaqoob Mujahid on Sunday, giving them names more agreeable to the extremist group’s history and ideology.