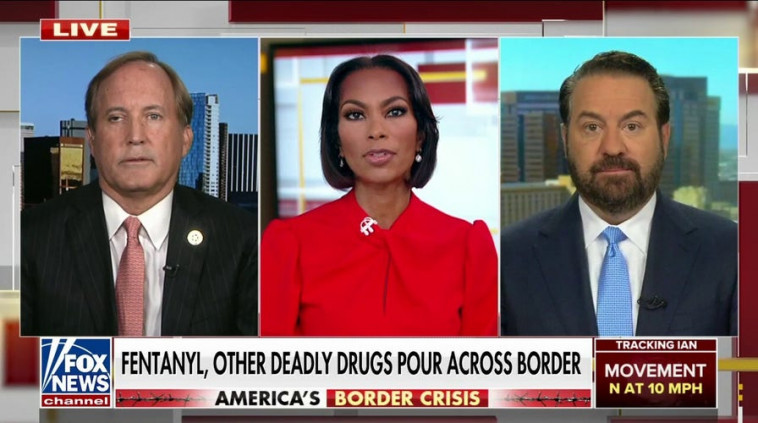 The Texas and Arizona attorneys general said Tuesday their states have stepped up to address the border crisis as a result of the federal government’s failure under the Biden administration.

Texas Attorney General Ken Paxton (R) and Arizona Attorney General Mark Brnovich (R) joined “The Faulkner Focus” to discuss how their states have responded to the crisis that has led to record-breaking levels of border crossings and the influx of drugs, including lethal fentanyl.

The Texas AG said the Lone Star State is “doing everything they can” to stop people coming across the border.

Brnovich warned, “More people have illegally entered our country through our southern border than the entire populations of Alaska, Vermont, and Wyoming combined.”

The Arizona AG warned about the influx of deadly fentanyl into communities.

“Just in the month of August at the Nogales port of entry here in Arizona, more than 5 million fentanyl pills have been seized, more than 40 pounds of fentanyl powder,” said Brnovich. “Put that in context, that’s enough fentanyl to kill the entire population of New Jersey.”

On Thursday, CBP officers at the Nogales POE seized: Approximately 72,000 fentanyl pills 2.45 pounds of fentanyl powder 2.9 pounds of cocaine 44.75 pounds of methamphetamine in the gas tank of a vehicle. (CBP Port of Nogales, Arizona)

Brnovich said that he and Paxton have been left to take up the responsibilities disregarded by the federal government.

The attorneys general joined a special hour of “The Faulkner Focus” devoted to the border crisis after host Harris Faulkner traveled to Texas to report on the ongoing migrant surge.

Brnovich went on to applaud Governors Greg Abbott, R-Texas., and Ron DeSantis, R-Fla., for “exposing liberal hypocrisy” by bussing migrants to sanctuary cities, triggering outrage from liberal leaders who are receiving only a fraction of the influx compared to border states.

Paxton said Vice President Kamala Harris is either “not living in reality or lying” when she claimed that the southern border is secure.

“I don’t think there’s any way that anyone could possibly say that the border is secure when we have record numbers, not even just record numbers, like 300% increase from when Trump was in office and record numbers of people coming across committing crimes. We have an epidemic of fentanyl overdoses. This is all attributable to this open border policy, and the Biden administration seems to want it.”

Elizabeth Heckman is a digital production assistant with Fox News.