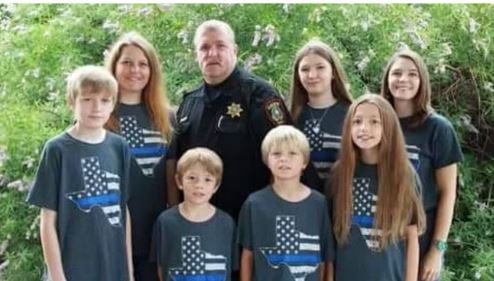 A Texas Sheriff’s Deputy and father of 6 is hospitalized with Covid-19 and is fighting for his life, while his wife is having to fight the hospital in court.

In late September, Jason Jones got sick and after a couple of days, he noticed that he lost his sense of taste and smell. This prompted Mr. Jones to get tested for Covid-19 which came back positive. The doctor prescribed antibiotics and a steroid, but over a few days, his condition continued to worsen. One night his wife, Erin, noticed he was changing color. A family member told her that Mr. Jones needed oxygen and to get him to the hospital. On September 28th, Mr. Jones was admitted to Texas Health Huguley Hospital. He immediately asked to be treated with Ivermectin, but the hospital refused. Ivermectin is the controversial medication being used to treat Covid-19 with, some would say, great success in other countries, while being restricted, sullied, and stymied here in the United States. We spoke with Erin about her husband’s situation and what she told us was both shocking and infuriating.

At the hospital, Mr. Jones’s condition continued to get worse for about a week. Realizing how sick he was and the day before being placed on a ventilator, Mr. Jones told Erin what he wanted her to do with some of his possessions. For example, he wanted his guitar to go to his best friend. Erin didn’t want to hear him talk like that, but Mr. Jones told her he “needed to tell her this stuff.” At the end, in the heart-wrenching conversation, Erin was told, “Call an attorney. They’re going to kill me.” This was not likely a premonition, nor had he called the psychic hotline. Jason Jones had been paying attention, done the research, and knew the same thing that’s happened to countless others was now happening to him. In fact, another Tarrant County Sheriff’s Deputy had passed away recently after being hospitalized with Covid. Mr. Jones learned that there seemed to be a pattern after being hospitalized. They essentially receive no treatment for the virus until they can’t breathe on their own and are then put on a ventilator.  A course of Remdesivir is administered over a 5-day period which is often followed by kidney and liver complications, then organ failure and death.

Mr. Jones specifically refused to be treated with Remdesivir.

Mr. Jones will have been on a ventilator for six weeks this Thursday, November 18th. He currently has 5 chest tubes in place to combat the high-pressure ventilation that has caused his lungs to collapse multiple times. The hospital has twice denied Erin’s request just for a meeting with the doctors involved with her husband’s care. After the second request she was told, “The doctors don’t have time to meet with every patient’s family”. Left without any alternative and determined to save her husband’s life, she hired an attorney as her husband directed. Erin filed a lawsuit against the hospital seeking the right to have Houston-based Dr. Mary Bowden treat her husband and administer Ivermectin.

A hearing was held, during which the hospital’s Dr. Jason Andrew Seiden, who had been treating Mr. Jones, told the judge he estimated a 10-15% chance of survival. A Texas state Senator also testified and advocated for Mr. Jones’ “Right to try” under Texas law which affords terminal patients the right to try experimental medications. Dr. Bowden also testified and informed the court that she has treated over 2,000 Covid patients, many of which with Ivermectin.  Erin also informed the court that she agreed to release the hospital from all liability to remove any potential problems or resistance from the hospital.

The court ruled in favor of Erin and Mr. Jones issuing an order that gave Dr. Bowden temporary privileges at Texas Health Huguley, and specifically allowed a nurse (acting under Dr. Bowden’s orders) to accompany Erin and administer the medication. The judge asked the attorneys to work together to craft the court order in line with his ruling and finalize the requisite details for everyone involved. The process took several days during which time the hospital claimed they would comply with the order of the court and gave every indication they were acting in good faith. Once complete, the hospital went so far as to tell Dr. Bowden to let them know what time to expect the nurse so they could accommodate her.

The next day, which was Veteran’s Day, Erin arrived with the nurse, signed in at the front desk and explained she had a court order allowing her to take the nurse to her husband’s room and administer the medication. Once they arrived at the security door to the room, to get in requires the visitor to use an intercom and request permission to enter, then security unlocks the door electronically. However, they told Erin she could not enter and they were calling the police, which Erin welcomed as she had a court order in hand. A few minutes later when police arrived, several hospital administrators were there to greet them. One of the administrators told police that the medication Erin was attempting to give Mr. Jones “…will kill him.”. The hospital then showed officers a 500+ page document. Unbeknownst to both Erin and her attorney, the hospital had somehow appealed the court’s decision without their knowledge and were granted a stay (order of the court put on hold pending the outcome of the appeal). The hospital was preparing the appeal while “working on” the court order. In fact, the hospital filed the appeal within one hour of the judge signing the court order. The hospital gave no indication that they intended to appeal and seemingly hid their plans in an attempt to catch Erin off-guard and unprepared.

Such deceitful maneuvering and trickery, perhaps tolerated in shrewd business dealings, is unacceptable for a hospital against the family of a patient under their care.

The appellate court ordered both parties to submit their briefs by Wednesday, November 17, thereby resulting in at least a minimum 6-day delay, but likely longer.

One of the core issues raised in the appeal was that the doctor who prescribed the Ivermectin had not physically examined the patient and only had a telehealth video conference with Erin at her husband’s bedside. Appealing on such tenuous grounds as arguing the now-universally-accepted practice of tele-health is bizarre. To say they have gone to extraordinary lengths and expense to prevent Ivermectin from being administered to a patient with 10-15% chance of survival is a gross understatement. The same is compounded when Texas law provides for this very situation and Mrs. Jones has waived liability.

It is important to know that appellate law usually requires an appellate attorney as it does in this case.  Like most specialists, appellate lawyers command a premium, especially ones who are required to file complex legal briefs on matters of life and death in just days, instead of months. Erin retained such a professional, but with 6 kids and the family’s sole breadwinner on a ventilator fighting for his life, she needs help.

Included in the hospital’s appeal is the same standard and tired talking points against the use of Ivermectin we’ve heard ad nauseum for a solid year. Such as that there is no peer-reviewed, published, double-blind, placebo-controlled studies showing Ivermectin is effective in treating Covid-19. To this point the question must be asked, “Why not?”.

It’s been a year and the only reason Ivermectin hasn’t been tested in the United States in accordance with the protocols required by the NIH and FDA is likely because they already know what the vaccine-killing, and pandemic-control-ending results will be.

It appears the hospital’s only motive that remains is to prevent the potential for Ivermectin to save this man’s life and create yet another record that it works.  Why else would the hospital go through the expense on a man they say has 10-15% chance of survival by using the legal process to stall, and in-effect killing time, which may very well result in killing Mr. Jones.

Please take a stand against this medical tyranny by helping Erin.  No matter what happens, this family deserves our help, prayers, and support.  This could happen to any one of us.