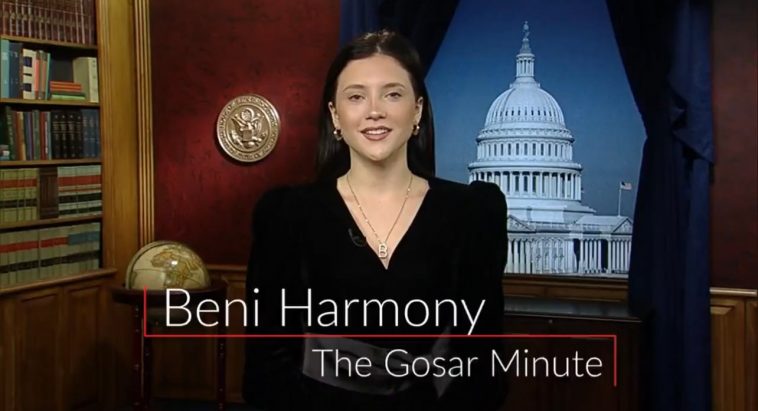 The Arizona 2020 election audit final report detailed hundreds of thousands of ballot discrepancies in a state where they declared Biden “winner” by less than 10,500 votes.

The Gateway Pundit has reported extensively on the Arizona audit’s official findings, 700,000 or more questionable ballots, and other discrepancies noted by audit officials and audit volunteers.

Maricopa County has done everything possible to obstruct this investigation into what really happened on November 3, 2020, and they have failed to rebut many key findings presented in the audit.

The Gateway Pundit reported that all evidence has been delivered to Arizona Attorney General Mark Brnovich’s office and he is currently conducting an investigation.

Benni Rae Harmony from Rep. Paul Gosar’s “The Gosar Minute” gives a great summary of the audit findings and concludes, “We still don’t know who won the election in Arizona.”

Harmony: Hey guys it’s Beni Harmony here with The Gosar Minute. Earlier this week, the Arizona Senate released a supplemental report addressing the blanket denials by Maricopa county officials of the serious findings of fraud, irregularities, and obstruction of justice found in the initial forensic audit report of the 2020 election. The report concluded that Maricopa County received 9,000 more mail-in ballots than it mailed out. Maricopa County was not able to rebut that. the report revealed 165,000 more ballots scanned and counted than were collected and imaged. This is obvious fraud. What else would it be? The report determined that nearly 28,000 ballots were cast by individuals who moved prior to the election. That is commonly referred to as breaking the law. The audit concluded that voting machines were in fact connected to the internet on election day, a serious breach of security. The county failed to rebut that fact finding. The county withheld, archived, or destroyed files, key laptops, and other equipment despite a subpoena ordering they be turned over to auditors. These files were deleted at 5 pm on February 1, 2021, the day before the audit began. This matter has been referred to the Arizona Attorney General, since destruction of public records is a crime. The Arizona Senate is to be commended for its truth finding mission. There were materials in serious breaches of election integrity, and to a degree that is 15 to 20 times the margin of victory for Biden. We still don’t know who won the election in Arizona. But I have my thoughts. President Trump is right to be calling for fair elections and decertification. This is Beni Harmony, bringing you the cold hard truth with The Gosar Minute

🚨GOSAR MINUTE🚨Recently, the AZ Senate released a report regarding the #AZAudit. Among other things, the report concluded that Maricopa County received 9k MORE mail-in ballots than it mailed out. Additionally 165k more ballots were scanned & counted than were collected & imaged. pic.twitter.com/yCgtoT7uX5

With all of the law violations that occurred and unverifiable ballots that were counted, it is clear that this election should have never been certified to begin with.

TGP has reported on the numerous likely criminal violations that took place in Maricopa County, including the deletion of election records prior to the issuance of audit subpoenas.

The law was violated in numerous ways during the 2020 election and Brnovich needs to uphold law and order.

There is not enough evidence to claim that Joe Biden won Arizona, and therefore this election must be decertified.