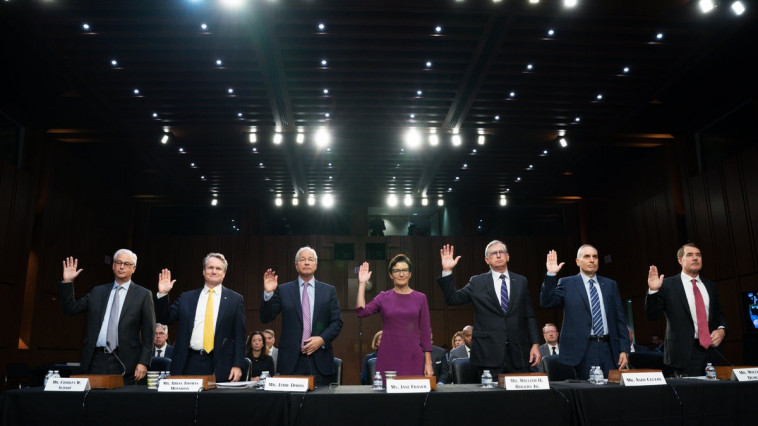 Talk about bear markets, the gross domestic product and opportunity costs was almost an afterthought when the CEO’s of the nation’s mega-banks testified before the Senate Banking Committee recently.

What stole the show was a debate “woke” capitalism, climate change, guns, abortion and social policy.

For most of two hearings, you may never know that the Federal Reserve raised interest rates for the fourth time since March because of towering inflation.

Economic and green eyeshade issues will never command as much attention as the wrangling over social policy.

“Thank you all for being here,” said Sen. Cynthia Lummis, R-Wyo., to the bankers. “There’s a bit of a flogging element to what’s happening today.”

“The biggest Wall Street banks have lost the trust of the American people,” said Brown. “I expect all of your banks to build up capital. To use it to invest in communities. Not just shareholders. Not just your own compensation.”

Republicans questioned whether banks were too “woke,” – bending to left-wing social pressures.

“I’m raising similar concerns about the politicization of our nations banks,” said Sen. Pat Toomey, R-Penn., the top Republican on the Banking Committee. “Accept the role that some liberals prefer, which is to have your institutions implement social policy on behalf of the state. Or, embrace your history as drivers and promoters of free enterprise and stay out of highly charged social and political issues.”

Toomey invoked how some of the banks are opting to cover the cost of travel for their employees after this summer’s Supreme Court decision on abortion.

“This decision is certainly an individual banks choice, but it does raise a number of questions, including have these same banks also committed to pay the cost for female employees facing unplanned pregnancies to place their children up for adoption, notably when it comes to the right to keep and bear arms, which is an actual constitutional right?” asked Toomey.

This comes as Visa, MasterCard and AmEx are working to identify sales of firearms at gun stores. Visa is introducing a code which will identify retailers which sell weapons and ammo. But the code won’t specifically detail what products consumers buy.

Codes at gun stores could help law enforcement track crime or suspicious sales. The credit card companies already use codes to documents transactions with merchants ranging from clothiers to florists.

The gun issue arose when the bankers appeared before the House Financial Services Committee last Wednesday.

“Progressives are already cheering that this will be a huge step forward in monitoring suspicious gun purchases,” said Rep. Roger Williams, R-Tex. “Anyone who is against the rights of gun owners will want institutions to flag every single transaction with a gun to law enforcement.”

Sen. Kevin Cramer, R-N.D., asked the bankers about their policies with the “gun” code.

“I want extra assurances that law abiding purchasers across the country will not be discriminated against using this merchant code as a means to an end,” said Cramer.

“We cannot be involved in telling the American citizens how their money will be used. That’s not our job,” said JPMorgan Chase CEO Jamie Dimon at the Senate hearing.

“We do not intend to use the code to limit or restrict the purchase of firearms by our customer base,” testified Jane Fraser of Citigroup.

But Cramer questioned the potential tilt to the left by big banks.

“Please resist the impulse to respond to the very loud noise in your left ear. I’m happy to be the loud noise in your right ear,” said Cramer. “When it comes to being one of the cool crowd, I know the pressure that you feel. I’m sorry that sometimes those of us on the conservative side aren’t as activist-oriented. But I want to help you.”

Sen. Steve Daines, R-Mt., asked about the political makeup of Bank of America’s board.

“It contains twice as many Democrat donors as Republican donors,” observed Daines to Bank of America CEO Brian Moynihan. “I’m not asking that yet that you tip the teeter-totter to the right. But how do you maintain ideological diversity as it relates to board composition?”

“I don’t know what our board does for political contributions. That’s not part of what we look at,” answered Moynihan. “Our company gives to candidates on both sides of the aisle. Not our company. But our PAC does, which is independent of me. I don’t make decisions.”

Sen. John Kennedy, R-La., offered his own unsolicited advice to the bankers.
“You will never win – never – the uber-woke sweepstakes. I understand that the pressure to run that race is fierce. You will never win it. Nothing you do will never be enough. The uber-woke people in positions of power in this town. They think America was evil when it was founded. And it’s even more evil today. You’re not going to convince them otherwise,” opined Kennedy.

Toomey worried that the Federal Reserve could compel banks to abandon fossil fuels and invest in green energy instead.

“Do you believe that the US banking regulators have the statutory authority to determine how quickly America transitions to a low carbon economy?” asked the Pennsylvania Republican.

“They are my judge, my jury and my hangmen. They pretty much can do what they want unless constrained by you,” replied Dimon.

“I think there is a very important balance to be had to be attained over the next few decades, the balance between energy security and energy supply, as well as a transition to cleaner, cleaner energy sources,” offered Fraser.

Despite all of the debate about political leanings and “woke” positions, lawmakers and bankers did take a few moments to discuss threats to the nation’s economy.

Dimon told senators that stagflation was his biggest concern. That’s where the economy slows but inflation remains high.

The price of consumer goods and the Fed’s latest interest rate hike shocked most lawmakers.

Chad Pergram currently serves as a congressional correspondent for FOX News Channel (FNC). He joined the network in September 2007 and is based out of Washington, D.C.