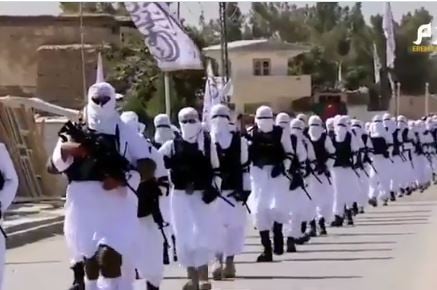 “I showed up outside the U.S. Embassy and I literally begged them to let me in,” this U.S. Army veteran said

The treasouous, illegitimate and failing Biden regime will send $144 million in “humanitarian assistance” from the U.S. Agency for International Development (USAID) and the U.S. Department of State to Afghanistan, which will wind up in the pockets of the Taliban terrorists, just like the $83 billion in military equipment the traitors surrendered to our worst enemies. Over 100 military family members were left behind in Afghanistan, while the U.S. Embassy repeatedly hung up on a former U.S. soldier in Pakistan as he pleaded for help and wouldn’t let him enter the building, as Fox News reported.

“Every week new revelations arrive about the scale of Biden’s betrayal in Afghanistan”, writes Daniel Greenfield of the David Horowitz Freedom Center . “After months of claiming that only a few hundred Americans had been abandoned behind enemy lines, the real numbers are still growing. Shocking reports continue to come to light including a military memo which claims that over a hundred family members of servicemen may still be trapped under Taliban rule.”

“The humiliating collapse in Afghanistan is not a mystery. It was the product of a deliberate strategy to maintain relations with the Taliban at any cost. Every step of the disaster was really a betrayal.

Why did the Biden administration abandon Bagram Air Base and the nearby prison facility holding thousands of Taliban, Al Qaeda, and ISIS-K prisoners without notifying the Afghans?

When the Taliban repeatedly violated their agreement to stop the violence, why did the Biden administration still insist on keeping our side of the agreement, withdrawing by the deadline even if it meant leaving Americans behind?

When the Taliban offered to let the United States hold on to Kabul for the duration of the evacuation, why did the Biden administration refuse and allow the Jihadis and their Al Qaeda allies to take over the city and maintain the checkpoints through which Americans and Afghans had to pass to the airport?

Why is there still no official determination about the role that the Haqqani Network, Taliban allies of Al Qaeda, played in enabling Islamic terrorists to make it through their checkpoints with heavy weaponry and bomb vests to carry out attacks, resulting in the murder of 13 American military personnel?

Why did the Biden administration hand over lists of allies to the Taliban and delay going out into Kabul to rescue Americans? Why, even now, does it continue to repeat the same lies that only a handful of Americans were left behind and that the Taliban were helpful and cooperative during the evacuation?

The common denominator for all of them is that the Biden administration prioritized diplomatic relations with the Taliban over the lives of Americans and our national security. It’s why the Biden administration continues to engage diplomatically with the Taliban, directing aid to Afghanistan, and negotiating the release of the Americans whom they had previously claimed didn’t want to leave.”

Read the whole story at FrontPageMag.