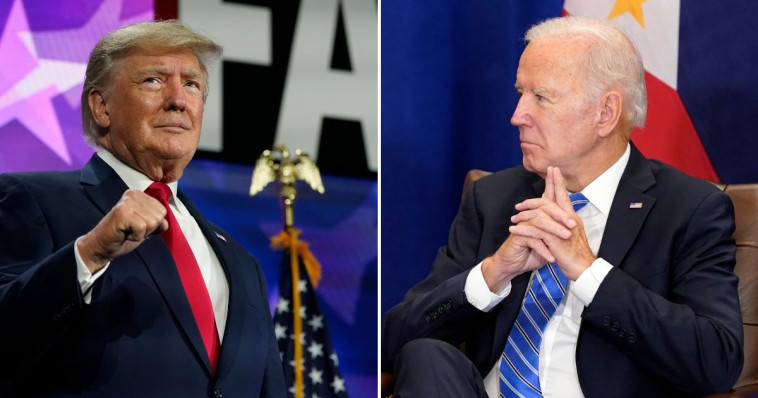 Can you imagine President Joe Biden — or anyone to the left of, say, Marjorie Taylor Green — wishing former President Donald Trump success?

But that’s essentially what Trump told Fox News host Sean Hannity during an exclusive interview that aired Thursday night, in which Trump hinted at — purposefully or otherwise — a 2024 run for the Oval Office.

“Beyond Republican or Democrat, I want to see somebody that’s great,” Trump told Hannity about the occupant of that office.

“I would rather have him succeed incredibly, even if it meant a much tougher — and maybe even a loss. I want to see what’s good for the country,” Trump responded.

See what I mean about sounding like a potential 2024 candidate?

Hannity took Trump’s answer in stride, but he also seemed to want to give the former president the opportunity to make his position crystal clear, perhaps because it might be so hard to believe in light of recent events like the FBI’s now-infamous Mar-a-Lago raid.

“So you’d be willing to go through all the hell that we’ve talked about today and all that you’ve been through all these six years because you put your country first,” Hannity said. “Is this a calling for you?”

The New York Post ran a short clip of the interview on Friday for readers without a Fox News subscription:

The Post also noted that, elsewhere in the interview, Hannity and Trump discussed the fact that Trump had asked Hannity to “go easier on Biden.”

““I thought you were very tough’ on him, Trump said — to which Hannity insisted, ‘I was telling the truth,’” the Post reported.

So, I’ll pose the question again: Can you imagine anyone on the left expressing similar sentiments about Trump?

Despite Biden’s avowed Roman Catholicism, it’s Trump who seems the better embodiment of St. Paul’s admonition to “bless those who persecute you; bless and do not curse them” (Romans 12:14).

Trump has not done that perfectly throughout his life or his political career; who among us has? But a little less acrimony and a little more Golden Rule might go a long way toward healing the division in this country — you know, the divisions Biden promised to heal if he were elected?

Maybe this interview will give Biden a change of heart, leading to some of that peacemaking. Yeah, I know, probably not — we probably have a couple more years under this divider in chief.

And speaking of what happens after the next couple of years, when asked if he was ready to make an announcement about a possible 2024 run, Trump was his usual cagey self.

“I’d love to, but I’m not allowed to legally,” he said, according to the Post, which pointed out that if Trump had decided not to run, there would be nothing preventing him from saying so.

Whatever happens in 2024 — and I’m a terrible prognosticator, so don’t ask for my guess — I can state one thing with absolutely certainly: We’ll all be a little better off if everyone on both sides follows Trump’s example here by listening to St. Paul and blessing those with whom we disagree — even if they curse us in return.

George Upper is the former Editor-in-Chief of The Western Journal and an occasional co-host of “WJ Live,” powered by The Western Journal. He is currently editor-at-large. A former U.S. Army special operator, teacher and consultant, he is a lifetime member of the NRA and an active volunteer leader in his church. Born in Foxborough, Massachusetts, he has lived most of his life in central North Carolina.

George Upper, editor-at-large of The Western Journal, is a former U.S. Army special operator, teacher, manager and consultant. Born in Massachusetts, he graduated from Foxborough High School before joining the Army and spending most of the next three years at Fort Bragg. He now lives in central North Carolina with his wife and a Maine Coon named Princess Leia, for whose name he is not responsible. He is active in the teaching and security ministries in his church and is a lifetime member of the NRA. In his spare time he shoots, reads a lot of Lawrence Block and John D. MacDonald, and watches Bruce Campbell movies. He writes “The Upper Cut,” a weekly column that appears quarterly (more or less). He is a fan of individual freedom, Tommy Bahama, fine-point G-2 pens, and the Oxford comma.