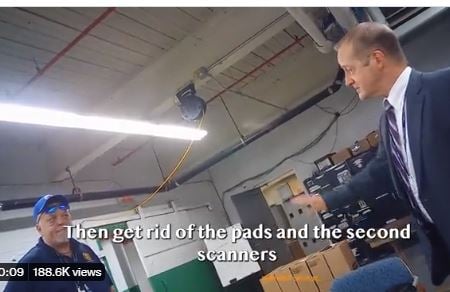 An election whistleblower in Delaware County, Pennsylvania released video evidence of the destruction of election data, documents, and equipment by election officials in the 2020 presidential election on Wednesday night.

The videos show election officials admitting to each other that their actions were illegal, even “a felony.” But the officials decided to destroy the election evidence anyway.

In one video James Allen, the Director of Elections Operations is seen in a backroom telling officials to destroy evidence knowing it was a felony.

in another video, Tom Gallager, a lawyer for Delaware County, is seen destroying election tapes — a felony.

We reported on this last night.

The videos are part of a larger lawsuit that will break the Pennsylvania voter fraud scandal wide open.

So right after a legal Right to Know request was filed, these Delaware County election employees marched straight to where they were hiding these election records and equipment and destroyed it all. And somebody got it all on camera. WHAT DOES THAT TELL YOU???!!!

Step 1: File a legal Right To Know request in court asking for the Delaware County election records you know these pricks are hiding.

Step 2: When the Delaware County officials freaked out by your specific Right To Know request go straight to where they have been hiding the election records & equipment to destroy them, you GET IT ALL ON CAMERA.

SOMEBODY SET THEM UP. SOMEBODY BAITED THEM WITH THE RIGHT TO KNOW FILING AND THEN CAUGHT THEM ALL ON CAMERA WHEN THEY DESTROYED THE ELECTION RECORDS AND EQUIPMENT. Can you people see where this is going?

This isn’t just about the destruction of the November 2020 election records; these corrupt county officials then engaged in a criminal conspiracy to create fake election records to hide what they did.

How many other corrupt counties in the 6 coordinated election theft states would have to scramble to try to destroy their election records and then manufacture new fake records to replace them if anybody legally filed to see them?

The lawsuit is going to blow the roof off of the Democrat voter fraud in the state of Pennsylvania.

Here is a copy of the 91 page lawsuit against the Delaware County officials.