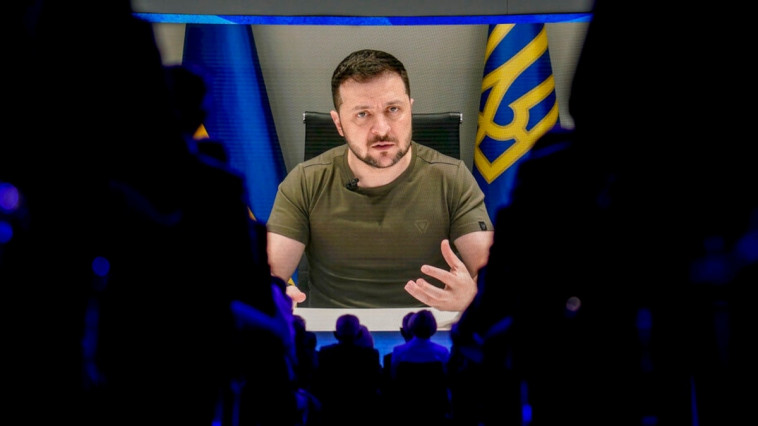 The billions of dollars in U.S. support to Ukraine is doing more than helping the embattled country defend itself from Russia – it is also putting America on track to funding a majority of Ukraine’s national budget this year.

Senators this week proposed an additional $12 billion in aid to Ukraine, which includes $3 billion in direct military training, equipment and weapons to help Ukraine fend off Russian advances.

The bill also includes another $4.5 billion in economic support to Ukraine. A Senate summary of the bill says the money will help “maintain the operations of Ukraine’s national government, including to enable the government to maintain macroeconomic stability and provide basic citizen services.”

Ukrainian President Volodymyr Zelenskyy displayed on a screen as he addresses the audience from Kyiv on a screen during the World Economic Forum in Davos, Switzerland, Monday, May 23, 2022. ((AP Photo/Markus Schreiber))

GOVERNMENT FUNDING TO INCLUDE OVER $12 BILLION IN NEW UKRAINE AID

That $4.5 billion would be in addition to the $13 billion the U.S. approved in May to support Ukraine’s basic government operations, which was in the broader $40 billion Ukraine aid package approved in May. That $13 billion was meant to fund basic humanitarian needs like food and shelter within the country in addition to the provision of other services to Ukrainian citizens.

That means if the new Senate language becomes law, the U.S. will have provided $17.5 billion in funding for Ukraine’s basic government services in less than five months. If the U.S. keeps up that pace, it could end up spending more than $40 billion this year to support Ukraine’s basic government functions, which is more than half of Ukraine’s current budget and the $70 billion budget Ukraine has proposed for 2023.

Passage of the Senate will would bring the total funding for Ukraine approved by Congress up to approximately $65 billion.

A growing number of Republicans have opposed additional aid to Ukraine in light of excessive federal spending and budget deficits that have risen sharply over the last few years because of emergency spending related to COVID-19.

James Carafano, vice president for foreign and security policy at the Heritage Foundation, said his group continues to support military funding to Ukraine, but raised questions about spending on civilian services.

“On the civilian side, the Europeans should bear the weight of that,” Carafano told Fox News Digital. “That keeps it equitable.” He explained that the U.S. is paying for about half of the outside military support received by Ukraine, and that European nations have a more direct interest in keeping Ukraine’s civil services up and running.

Carafano added that sending weapons to Ukraine to help it fight Russia carries a far lower risk of corruption than sending billions of dollars to fund Ukraine’s broader government. He said Ukraine never underwent the transformation that took place in Estonia, and said corrupt elements of the government mean U.S. financial aid is at risk.

“The worst thing we can do is just throw money at Ukraine,” he said. “I’m very skeptical about putting money into the hands of this government on civilian aid.”

Pete Kasperowicz is a politics editor at Fox News Digital. He can be reached at Peter.Kasperowicz@Fox.com and his Twitter handle is @PeteKDCNews.