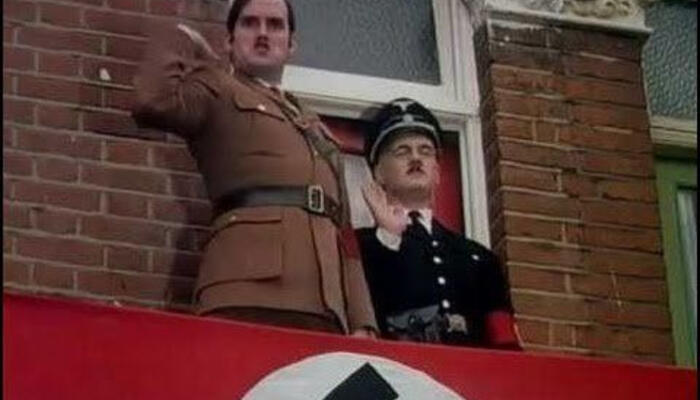 John Cleese doesn’t gladly suffer woke fools. The legendary comic actor has pulled out of an appearance at the Cambridge Union as a protest. The Union, ironically a debating society, has banned art critic Andrew Graham-Dixon for impersonating Adolf Hitler during a debate last week.

I was looking forward to talking to students at the Cambridge Union this Friday, but I hear that someone there has been blacklisted for doing an
impersonation of Hitler

I regret that I did the same on a Monty Python show, so I am blacklisting myself before someone else does

The impression came in a classic Python skit, “Mr. Hilter and the Minehead by-election.”

The sketch is absurdity itself — and, of course, extremely funny. Later, Cleese would do something similar — and hilarious — in his show Fawlty Towers. But those were better times, before the left decided humor is verboten.

Wokeness hasn’t been kind to the surviving members of Monty Python. Recently the Old Vic theater in London canceled a production of Into the Woods that Terry Gilliam was developing. Cast and crew apparently were uncomfortable because Gilliam isn’t as stridently progressive as them. He lauded Dave Chapelle on social media and never joined the #Metoo mobs. A few years ago he said “I tell the world now I’m a black lesbian… My name is Loretta and I’m a BLT, a black lesbian in transition.”

And Cleese himself has been an outspoken defender of author J.K. Rowling, who’s been savaged on social media and elsewhere for suggesting that men pretending to be women aren’t really, ya know, women.

The funny thing is Cleese was going to Cambridge as part of a documentary on wokeness called “Cancel Me.” He won’t be lacking for content.