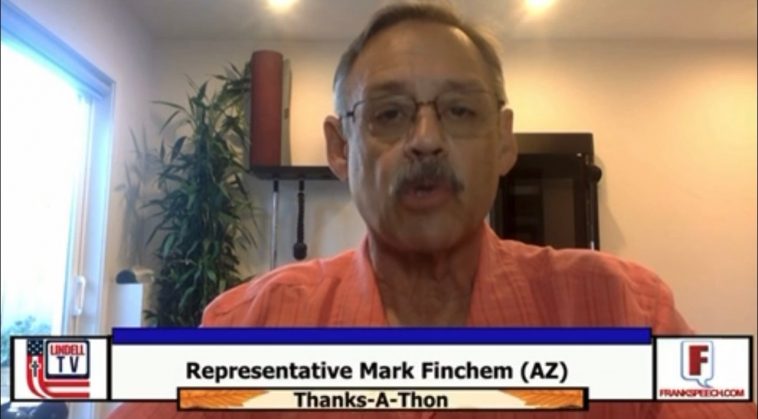 The Gateway Pundit reported on State Senator Rogers’ appearance where she stated that Arizona will attempt to decertify in the next legislative session.

State Rep. Mark Finchem recently spoke at President Trump’s Save America Rally in Des Moines, Iowa where he told the enormous crowd that roughly 35,000 fictitious votes were discovered in Pima County, in addition to the devastating findings from Maricopa County.

This finding was so huge that President Trump shared The Gateway Pundit’s report via press release.

Another damning report found that two precincts in Pima County had over 100% turnout for mail-in ballots and 40 precincts had over 97% returned.

President Trump released a statement highlighting this clear evidence of voter fraud and calling for decertification of the fraudulent 2020 election.

Joe Biden was declared the winner of Arizona by less than 10,500 votes!

Mark Finchem is now fighting for a full forensic audit of Pima County’s 2020 election. Finchem has started a nationwide petition to audit Pima County and every American needs to sign on, HERE!

All evidence of fraud statewide was delivered to Arizona Attorney General Mark Brnovich and Arizona is counting the days, waiting for indictments and decertification.

It has been 65 days since Mark Brnovich received the full unredacted Maricopa County audit report and we have still seen no action.

Mark Finchem joined Brannon Howse yesterday to update the nation on his ballot integrity project and Pima County, and to let us know that he is still expecting  arrests to be made along with State Senator Rogers.

Additionally, the audit is still not complete as we await the router and Splunk log report, and the kinematic artifact detection report.

Regardless, Mark Brnovich has obtained video evidence of three identified individuals violating the law and he needs to take action.

Fichem: Well, the whole point of separation of powers in our constitutional form of government is that the legislature engages in collecting information, collecting evidence, hearing from the people, and then we refer what some people might call an evidence book to the executive branch. In this case, that is the Attorney General. Now one thing that people, I don’t think, appreciate is the Attorney General is not limited to just the evidence book that was turned over to them by the Arizona Senate, yeoman’s work that they did. The Attorney General of the State of Arizona is not bound by anything other than his imagination, and the staff that he has, and unfortunately, the limited resources he has to investigate any report of election systems fraud, of voter fraud, of ballot fraud, any of those components that would serve to interfere with the People’s consent to be governed. Now, on the other side of that consent to be governed question, and it sounds a bit academic, but it’s extremely important for everybody to remember: When you give up a small amount of your personal sovereign right, your consent to be governed, you retain the right to question the people who are counting the votes. So elections should be secret, but the counting should never be secret. And that’s one of the things that is a big outcome of the November 30th hearing that I chaired and the work that the Senate did as a result of the December 14th subpoenas. In fact, one of those things that we’re rolling out right now, have been for a number of months is the ballot fraud countermeasures program. In fact, people can go to ElectionsByThePeople.com that’s ElectionsByThePeople.com. And if they want to have currency grade, fraud countermeasures built into the ballots, the ability to have an audit trail built into ballots, the ability to hold elections bureaucrats, and I’m not going to call them officials because I think in many cases they’ve moved from officialdom to just think of the bureaucratic state that Woodrow Wilson would be very proud of. It gives us the opportunity as the people to watch the watchers. And that is one of the things that I fear we have become very tolerant of over the decades. And you know, a nation isn’t just what it does, it’s what it tolerates. That’s Kurt Tucholski from the 1940s. And we all know what happened when the German people tolerated a government that was engaged in tyranny. So, one of the things I’m really excited about is we, even though the Senate has completed most of its work, and I do believe that we’ll see a follow on report related to a kinematic artifact review, some other things that had not yet been ascertained. For example, the Splunk logs and the routers. We still want to see the routers. There are other pieces to that, in fact, Maricopa County isn’t the only county. If people want to go to voteFinchem.com they can click on the link up there that demands a vote or an audit of Pima County. We’ve found certain discrepancies and we are contemplating the idea of calling for an audit, at least a public hearing sometime in the near future about what happened in Pima County. So for the people that think that this is somehow over that we’re not, that we’re done and nothing’s happening. I think back to your original question. Prosecutors are engaged in two things number one, investigating crimes and making sure that the people that they charge committed the crime. Number two, they like to put people in jail so I have every reason to believe that there will be some kind of an arrest warrant coming out of the Attorney General’s office.

Finchem: So, for people, if they want to see the ballot fraud countermeasures and really urge their states to be involved, and by the way, we’ve got seven states right now that want to spin up having watermarks and an audit trail on their ballots. They can go to ElectionsByThePeople.com, and if they want to encourage legislators in Arizona to engage in an audit of Pima County they can go to voteFinchem.com That’s voteFinchem.com. At the very top, there’s a link, very simple, click on that link that says “Audit Pima County”, put your name, and similar to what Senator Rogers is doing. And by the way, I am still an active representative in Arizona House of Representatives. But similar to what Senator Rogers is doing, it’s amazing what legislators will do when they know that the people are behind them. And that’s the whole point of many of these petitions. To give represented elected representatives the courage, if you will, to say “We’re with you, the people are with you on this. We want this done.” Before looking I think the most important thing that we can look at is the idea of a watermarked ballot that is highly controlled; controlled just like our currency is and people can sign on to that at ElectionsByThePeople.com.

Arizona State Senator Rogers has promised to bear down on the issue until we see arrests made.

Mark Finchem is pushing to expand the audit investigation beyond Maricopa County.

More information can be found at ElectionsByThePeople.com so that more states can sign on to secure our elections again.

Contact your legislators and send their names to ElectionsByThePeople.com so that they may be onboarded.

No matter where you live, sign the Petition to Audit Pima County, Send your state legislators to ElectionsByThePeople.com, and contact Arizona Attorney General Mark Brnovich to demand law and order.