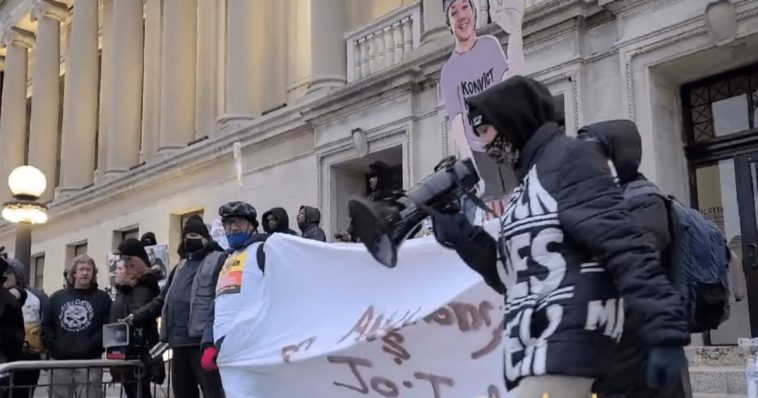 Tanya James, of Arkansas, crossed state lines to get to the #Kenosha courthouse where she suggests over a bullhorn that Kyle #Rittenhouse should have been killed.

“Kyle should have never made it to trial! Bring that bitch to my neck of the mother f—ing…” pic.twitter.com/SdVr1r0FUC

James, along with many other demonstrators, energetically harvested havoc and chaos outside the courthouse where Rittenhouse was under trial. Plenty of demonstrators got violent and were arrested by police.

As we reported yesterday:

NOW – Police arrest two BLM supporters outside the courthouse of the Rittenhouse trail.pic.twitter.com/XoejZ84GRh

Officials stated that numerous policemen were dispatched to “keep crowds of citizens and media from interfering” with the arrests.

KPD is aware of numerous attempts by malicious actors to spread disinformation on various social media platforms. To date, there is no credible threat to public safety. For factual and accurate information please follow @KenoshaPolice and Kenosha Police Department on Facebook

With Rittenhouse being found “not guilty” on all five counts against him, it seems that there may be a large uptick in left-wing violence occurring in Kenosha tonight. A multitude of Twitter accounts have been inciting violence following the verdict.

Another social media user lamented that Rittenhouse was not guilty but said, “on the upside, he will be a lot easier for someone to get at”, with a tombstone emoji