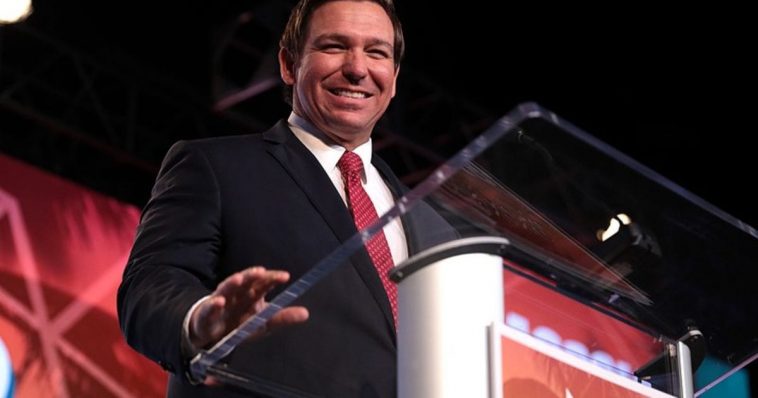 When DeSantis was asked about the illegal immigrants that the Biden Administration has secretly flown into Florida. DeSantis suggested that he might send them to a state that is near and dear to President Biden, Delaware.

A reporter asked DeSantis on Wednesday, “Governor, we wanted to ask you about a story that’s been of interest to a lot of our viewers, migrant flights to the Jacksonville area. Your spokesperson told us your office is aware of 78 such flights in recent months?”

To which DeSantis responded, “There’s no notification to the state of Florida. These are done mostly in the middle of the night, and it’s clandestine and we really have no say into it.” The Governor went on to say “I know when we initially got wind of this, it wasn’t through normal channels. It’s people in the federal government who are effectively leaking this to us so that we have a heads up on it.”

DeSantis then suggested he would do something totally amazing, “You know, my view would be, why don’t we if they’re going to come here, you know, we’ll provide busses and provide them. I will send them to Delaware and do that.”

“I mean, if he’s not going to support the border being secure, then he should be able to have everyone there. So we will do whatever we can in that regard, and we are absolutely going to do everything we can.”

DeSantis also slammed Biden for how he is handling the Border crisis as well as the American economy “The president has said that basically, they want to even pay reparations to people who came illegally. Just think about that you as an American, you get higher gas prices, you get higher grocery bills, you get told basically to just grin and bear it.”

“Someone breaks. The law comes illegally. They’re going to cut him a check for hundreds of thousands of dollars. That is just unbelievable, but that’s what we’re dealing with. So they’re not enforcing the law. I had people there to help Texas Governor Abbott.”

DeSantis also pointed out a major flaw with the current immigration system, “It’s interesting if you’re trying to deter kind of illegal migration in the interior of the country. If you come illegally and they don’t catch you, it’s actually in some respects worse than if they catch you.”

“Because when they catch you, they’ll give you money or potentially put you on a conveyance to get you somewhere. Whereas if they don’t catch you, you’re kind of on your own and you don’t necessarily get any money from the government and everything. Really, really perverse incentives.”

Watch below for the full video: