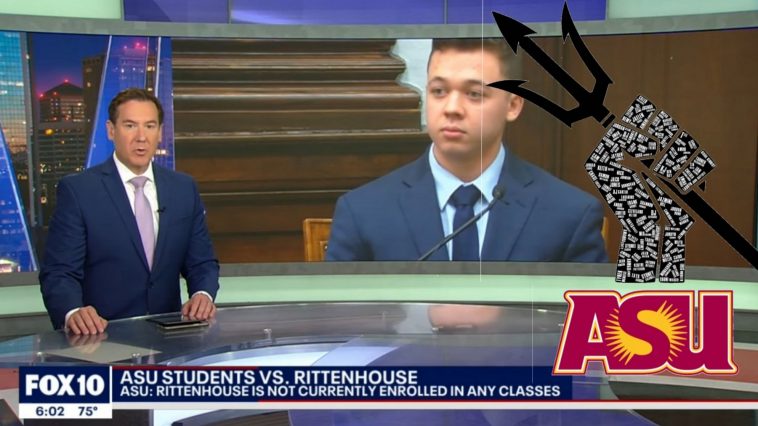 Earlier this week, several groups of unhinged leftist students began pressuring the administration at Arizona State University to “withdraw” Kyle Rittenhouse’s enrollment from the school, calling him a “violent blood-thirsty murderer.” The triggered students even held a rally on Wednesday to demand the school take extrajudicial action against the acquitted teen.

Before the protest could even be held, the notoriously woke school caved to the mob, announcing on Tuesday that Rittenhouse was “not-enrolled” in his classes any longer. In ASU’s statement, a spokesperson vaguely claimed it was due to actions taken by Rittenhouse himself that led to him being kicked out of the university.

Now, ASU’s claim that they had nothing to do with the sudden change in his enrollment status seems to be falling apart.

On Friday, Kyle Rittenhouse and his spokesperson Dave Hancock hosted a live Twitter discussion that featured an extensive Q&A session with the listeners.

They discussed a wide range of topics, including his former lawyer Lin Wood, his fundraising campaign over the past year, and of course his plans for upcoming lawsuits against the lying, corrupt media establishment that has slandered the teen since the night he was forced to protect himself against a crazed mob of leftist thugs.

The pair also directly contradicted ASU’s claims, stating that Kyle “absolutely intends to walk on” and attend classes this coming spring. They said that instead of honoring the commitment after he was admitted to the school, ASU sent him a “compassionate withdrawal” request the day before his final verdict.

According to Hancock, the college is the only one that has made any changes – if it were up to Rittenhouse, he would still be enrolled.

“They attack him [Rittenhouse] by saying he wasn’t [enrolled] in the college of nursing – well, he was in all the prerequisites and he was ADMITTED to [Arizona State University]. He busted his a*s.

They [ASU] offered him a compassionate withdrawal the day before the verdict.”

Rittenhouse says that he never even got back to them with a response, essentially declining the offer to withdraw from enrollment, but the college went ahead and kicked him out of classes anyway – and then announced it when they were getting pressured by the leftist activist groups on campus.

“So they gave him a compassionate withdrawal [but] he absolutely intends on walking on campus.

We were actually just there. We were just on that campus driving around, checking it out – looking at the halls, the library, the dorms, the off-campus housing – and so we were just there and found a couple of places he might want to live, so he has every intention [to attend].

The only way he will not be attending [Arizona State University] this spring is if the college administrators prohibit him from attending.”

I smell a lawsuit. Get em’ Kyle.#KyleRittenhouse #asu #FJB pic.twitter.com/h7lZW6ClyD

If what Kyle and his spokesperson are saying is true – and there is no indication otherwise – he is about to add another big lawsuit to his upcoming payday.

ASU cannot discriminate against him and issue this ridiculous extrajudicial punishment just because the woke mob is unhinged and fueled by the media’s lies.