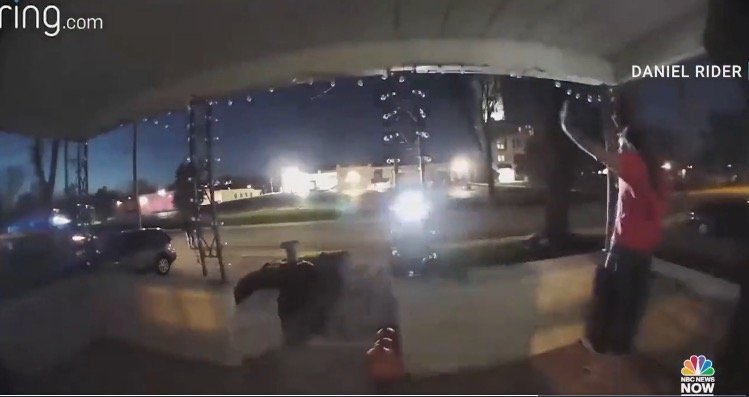 Ring footage obtained by NBC News shows the moment Christmas parade killer Darrell Brooks was arrested after murdering at least 5 people and injuring more than 40 others.

At least 5 people are dead and 40 others injured after Darrell Brooks broke through the barriers with his SUV and sped through the Waukesha Christmas parade Sunday evening.

Darrell Brooks is seen standing on a porch half a mile from the Christmas parade and knocking on the door shortly after he plowed over dozens of people.

“I called an Uber and I’m supposed to be waiting for it over here, but I don’t know when it’s coming,” Brooks tells resident Daniel Rider, according to NBC News.

“Can you call it for me please? I’m homeless,” he added.

Mr. Rider told NBC News he was watching a football game and had no idea that Brooks had just mowed over parade-goers nearby.

Rider invited Brooks inside, made him a sandwich, gave him a jacket and let him use his phone.

“All of a sudden, I look outside my street and I see a few cop cars drive by and I’m getting extra nervous,” Rider told NBC News adding that he told Brooks to leave.

Brooks got desperate and began pounding on the door again claiming he had left his ID behind after another neighbor called police.

Brooks put his hands up and police officers took him into custody.