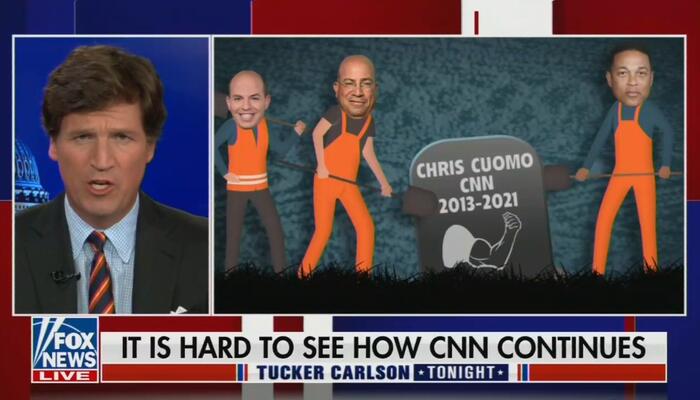 Reacting to CNN finally suspending Prime Time host Chris Cuomo, Fox News Channel host Tucker Carlson opened his show by lampooning the “[b]ig changes in the tiny hothouse — and it is tiny — of cable news” with the departure of the “illiterate” man who routinely spewed “a bouillabaisse of incomprehensible grammar,” but surprisingly defended Cuomo for helping his brother, disgraced New York Governor Andrew Cuomo (D).

Carlson began by saying the possible end of the show “feels like the end of something” as those of “us here at Fox…saw his clips and they transfixed us” to the point of airing them “as a public service but also because, honestly, we could not help ourselves,” but marvel at how “a man who could barely speak English [would] up with a paying job on television.”

Before going into his bizarre weight-lifting videos, Carlson had a few more jokes:

Was it some kind of weird affirmative action program for the illiterate? We never figured it out. But it was remarkable to see it. Sentence after badly mangled sentence, a bouillabaisse of incomprehensible grammar. You couldn’t understand any of it. It was a kind of performance art, a communicator wholly unable to communicate.

Adding that “Cuomo was a buffoon” and an “incredibly self-righteous and false” person, Carlson pointed out nothing happened to Cuomo following his fake Covid quarantine and staged reemergence from his basement. Instead, Carlson said what did result in a suspension was Cuomo’s collusion with his brother to respond to sexual harassment claims.

Carlson made clear he wasn’t defending Andrew’s behavior, but said Cuomo put family first even though he’s “an idiot” and thus more of a man than Brian Stelter (click “expand”):

But Andrew Cuomo was Chris Cuomo’s brother and that’s what you do with brothers, even the loathsome ones. You help them when they need it. Period. It’s called loyalty. At CNN, as at the rest of the media, this is an alien concept. Is there a single person at CNN or any other left-wing network who would risk his job to help his own brother? No. Above all, these people are careerists. Ruthless careerists. [PUTS BRIAN STELTER’S FACE ON-SCREEN] If Jeff Zucker told this guy to denounce his own wife on television, do you think you hesitate before doing it? Oh, of course he wouldn’t. Not for a second.

So when we tell you that the media are corrupt, we don’t just mean they’re corrupt politically. It is much deeper than that. They don’t acknowledge the most important roles in life: your first obligation is to your family. Your first obligation is not to the state, it’s not to a political party, it’s not to Jeff Zucker or some creepy billionarist at The Atlantic magazine. It’s not even to your own career. Your most basic obligation is to the people you are related to. When they need your help, no matter who they are, even if you’re the governor of a state, even if they’re horrible people, you help them anyway because it’s your family. Chris Cuomo may be an idiot and he is, but he understands that. What a thing to be fired for.

Following a lead-off interview with Jason Whitlock, Carlson brought back the jokes as he moved on to wondering what a Cuomo-less lineup will mean for CNN, so he started with a hilarious graphic from his producers depicting “Dwarf King” Jeff Zucker and “his minions” in Lemon and Stelter “putting Chris Cuomo in a shallow grave.”

Our friend and WMAL host Vince Coglianese then joined the party and he had a comedic take of his own: “I think I figured out why Chris Cuomo lifts so much. It’s because he was the only guy carrying that network’s ratings. As small as those ratings were, the reality is Chris Cuomo was the only draw that network had…[T]he typical American meathead was about the only thing that was actually getting an audience.”

After Carlson quipped that “being the highest-rated anchor on CNN really is being like the best caterer in Uzbekistan,” Coglianese closed out by citing the fact that this endeavor showed which voices actually matter to the elites and which ones don’t (click “expand”):

COGLIANESE: Yeah, exactly. And what happens is now — is that this is kind of a — it’s kind of a good tell for what, like, our ruling class is interested in. Like, the elites are very insular. They don’t care about what the average audience member is interested in. They don’t care that the way you probably had watched CNN through the last few years has been you accidentally bumped into it at an airport. It’s not about that. It’s about what do their friends at The New York Times think? The second The New York Times —

COGLIANESE: — and The Atlantic turned against Chris Cuomo, Chris Cuomo was thrown off the ship. This is — it’s a — these are people who do not care about the average American. They care more about the people they’re going to encounter at lunch, probably at a place that I can’t afford.

CARLSON: Imagine working for a company in which your boss cares what The Atlantic magazine thinks? I mean, that’s — it — it’s beyond. Imagine knowing someone who cares what —

To see the relevant FNC transcript from November 30, click here.