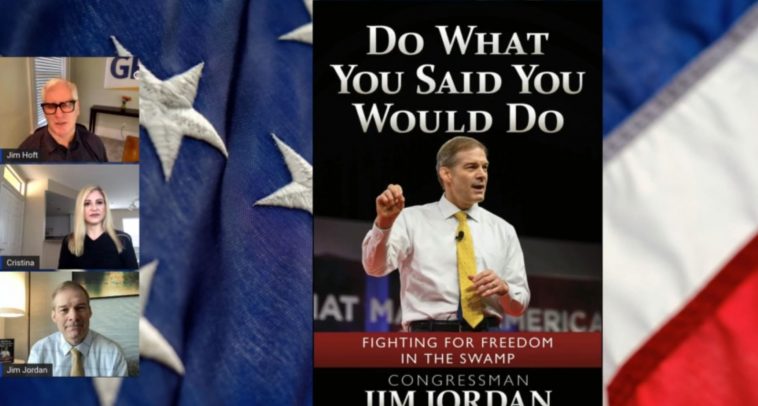 The Gateway Pundit’s Jim Hoft and Cristina Laila interviewed Rep. Jim Jordan (R-OH) on Saturday morning. Rep. Jordan is coming out with a new book in the coming weeks:

Do What You Said You Would Do: Fighting for Freedom in the Swamp

The book is currently available at Amazon.com. During our discussion this morning Rep. Jordan did not hold back and delivered the red meat.

In discussing the Department of Justice overreach and persecution of patriotic Americans, Jordan said this:

Jim Jordan: You can’t have a Justice Department that is based on politics. And it’s supposed to based on the rule of law, equal treatment under the law. That’s how it’s supposed to operate. It doesn’t seem to be… When I first saw this story about the Justice Department going after parents in the school board situation, it reminded me on what took place about a decade ago when the IRS was going after conservatives… Now we see the Justice Department doing something even worse in my mind. Because they’re labeling parents and using the the domestic terrorism, the counterterrorism division of the FBI. That’s where the email came from. It came from the counterterrorism division of the FBI!… I think the letter was just a pretext for the government to go after parents which is even more frightening! On the Kyle Rittenhouse verdict and media reporting.

Jim Jordan: It’s not the first time the Democrats, the media have lied… It’s happened to you guys, what they say about you. It happens to me every day. CNN is always saying something about conservatives. Yesterday was a win for the Constitution. It was a win for due process. It was a God Bless America day. It was a win for the facts, for the truth, for the Second Amemdment. If that wasn’t self-defense then somebody show me what self-defense is… God bless what that jury did with the real threat of intimidation and harm coming to them. They did the right thing. And God bless Kyle Rittenhouse. That had to be one just tremendously difficult year.

On his new book Do What You Said You Would Do: Fighting for Freedom in the Swamp

Jim Jordan: The point is after you make promises and get into office, if you get elected, you do what you say you were going to do… I point out that no one did that more than President Trump. No one did more on what he said he was going to do than President Trump. And I try to take readers behind the scene and what a good man and how he fought for this country in so many ways. I think your viewers and listeners will enjoy the read…

On the next Speaker of the House – is this something in his future?

Jim Jordan: No, no, if we win, God willing, and I think there’s a real good chance of that happening. And I think we can win big… If we do I want to be Chair of the Judiciary Committee. Historically, that is the committee that is focusing on protecting your rights, Americans’ rights. Your First Amendment rights. We know what the left wants to do with the Second Amendment. Your privacy rights, that’s the committee that’s supposed to focus on that. And frankly, under Chairman Nadler, it’s been just the opposite… We need to investigate Fauci and all the misleading things he’s told us over the last year. He knew from the get-go this thing likely came from the lab. And he misled us all this time. Somebody needs to learn how thousands of Americans’ tax returns became public. That’s not supposed to happen in our country.

On the Democrats unprecedented move to force Republicans off of their committees.

Jim Jordan: Yeah, while the FBI is targeting parents, while the FBI is getting ready to give people who came into our country illegally, $450,000, while inflation is at a 31-year high, while gas prices are just climbing and climbing, while everythign just costs more, what are Democrats focused on? Getting a guy kicked off of his committee. There’s a reason that 71% of our citizens think the country is on the wrong track. It’s because it is!… It’s ridiculous. It’s wrong. But I tell you what, if this is the bridge that they now crossed, then if it’s good for one side frankly is should be good for the other. And I think we’re going to have to look at some interesting situations in a year from now… I wish they hadn’t have done this. They’ve broken so many precedents, violated so many norms that are part of our political norm, it’s just unfortunate.

On the Democrats and DOJ targeting Steve Bannon and former Trump Chief of Staff Mark Meadows.

Jim Jordan: I think what they’ve done to Steve Bannon is wrong… But if they decide that they are going to compel under criminal contempt a Chief of Staff to a President of the United States to come talk, that is unbelievable! That has never happened… If they do it, as I said before, if it is good enough for one side it is good enough for the other.