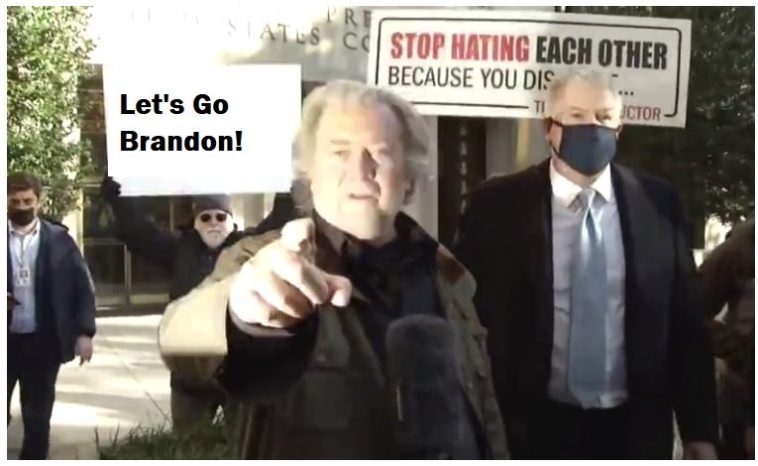 Former Trump Chief Strategist Steve Bannon turned himself in this morning at the DC FBI Field House following his unprecedented indictment by the Biden Regime on Friday.

In an unprecedented move, Steve Bannon was charged Friday, after he failed to appear on Capitol Hill that morning, with two counts of contempt for failure to comply with a committee subpoena.

Steve’s arrival was filmed and he delivered a message to his supporters from outside of the DC Field Office.

Around noon Eastern, Trump 2020 Strategic Advisor Boris Epshteyn posted an update — the regime is holding Bannon in handcuffs while he awaits his hearing on a MISDEMEANOR.

Steve Bannon emerged defiant from court this afternoon promising to go on offense.

A defiant Stephen K. Bannon emerged from the D.C. federal courthouse this afternoon promising to deliver Joe Biden, Merrick Garland, and Nancy Pelosi the “misdemeanor from hell” following his indictment on two counts related to an unconstitutional contempt of Congress charge.

Bannon, 67, emerged several hours after his first appearance before a D.C. court and used the specter of Hunter Biden’s “hard drive from hell” to frame his opposition to the case against him.

“I’m telling you right now, this is going to the misdemeanor from hell for Merrick Garland, Nancy Pelosi, and Joe Biden.

“Joe Biden ordered Merrick Garland to prosecute me, from the White House lawn, when he got off Marine One,” Bannon alleged, alluding to a politically-motivated prosecution the likes of which America has never seen.