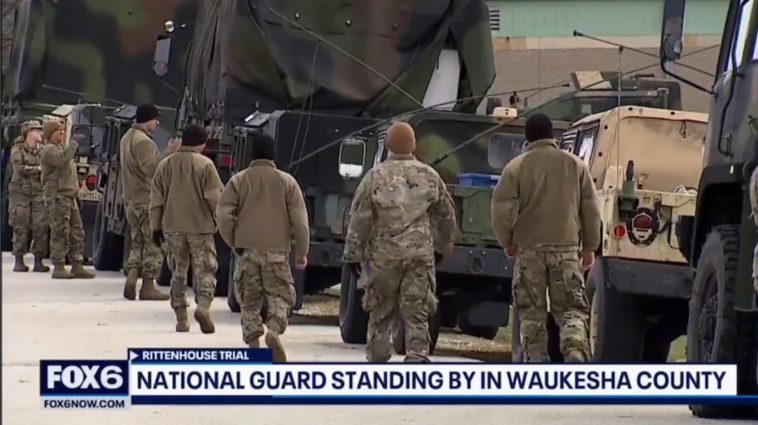 Jury deliberations in the Kyle Rittenhouse trial began on Tuesday after the defense was able to wrap up their final arguments in the case.

All of the evidence that has been presented at trial seems to indicate that Rittenhouse was indeed acting in self defense as he claims, which has prompted threats of violence from BLM and other radical leftist groups who say they will burn cities and cause mayhem all over again if the jury finds Rittenhouse anything other than guilty on all charges.

The threats of crazed leftist violence caused Wisconsin Governor Tony Evers (D) to call in the National Guard as backup for the city of Kenosha if riots break out after the verdict is read.

Over 500 troops are stationed at the ready, waiting for a call from local law enforcement.

🚨#BREAKING: National Guard troops in Wisconsin are on stand by

Around 500 National Guard Soldiers are on standby in Kenosha, Wisconsin, in preparation for a verdict in the Kyle Rittenhouse case this week as they prepare For possible large protests pic.twitter.com/QkWpwmF3dJ

A spokesperson for the National Guard told Fox6 that the decision to stage the troops so far away ” was made “as a consultation between state and local leaders.”

The Wisconsin National Guard won’t say where they’re staging 500 troops; we found them 60 miles away from Kenosha, which means it would likely take 1.5 hours to get there if local police call them. Gov. Evers activated them to help, if needed, when the Rittenhouse verdict comes. pic.twitter.com/HOWqvUSghh

Strange – similar to January 6th, backup is nowhere to be found where the actual incident is set to take place – and anyone coming is a long ways away.

What is going on in Kenosha?