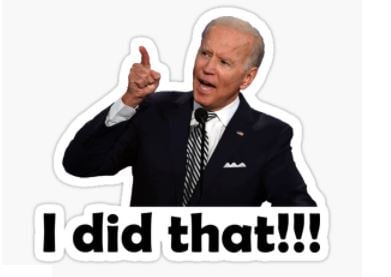 Biden is taking another action that goes against America.  This one is costing Americans lots.

Biden shuts down oil production in the US and then sells America’s reserves of oil to Asia.  How does this make sense?

Practically overnight, America went from oil independence and being a net oil importer, to suffering shortages and, as noted, rising prices. When asked about the problem, Biden risibly blamed OPEC and Russia. Meanwhile, Jennifer Granholm, the energy secretary, simply cackled maniacally and claimed the administration was helpless.

Biden is now under pressure to tap the SPR to relieve some of the pressure on fuel prices. (Again, remember that Biden birthed this problem by squashing American fuel production, thereby creating the shortage. There’s also the little matter of his administration working with Congress to print money like rolls of toilet paper—except that toilet paper is more useful than inflationary dollars.) Even Chuckie Schumer wants to lower prices by chipping away at our SPR emergency supply, despite our having vast, untapped resources beneath American land.

It turns out, though, that Biden is already tapping into the SPR; he’s just not doing it to help Americans. A report in investment circles is finally trickling down into the mainstream news: Biden is selling massive amounts of SPR oil…to Asia!

This is based on a Bloomberg report:

About 1.6 million barrels of crude from the U.S. Strategic Petroleum Reserve — a monthly record — was shipped out in October, according to data from market intelligence firm Kpler. Three cargoes were loaded onto a supertanker in the U.S. Gulf Coast and are headed to Asia.

“Given the ongoing pace of the current SPR release — 12 million barrels in the last two months and the biggest weekly release so far last week at 3.1 million barrels — it’s fair to assume more SPR barrels are going to leave U.S. shores in the weeks ahead,” said Matt Smith, an oil analyst at Kpler.

Biden gave Taliban terrorists $84 billion in arms and gear and planes and choppers.  Biden opened the Southern Border and more than a million illegal immigrants have crossed into the US.  Now Biden sells the US oil reserves to Asia after changing America from being an oil exporter to dependent on Russia and the Middle East.

Is it time to impeach and remove Biden yet?  If not when will it be enough?