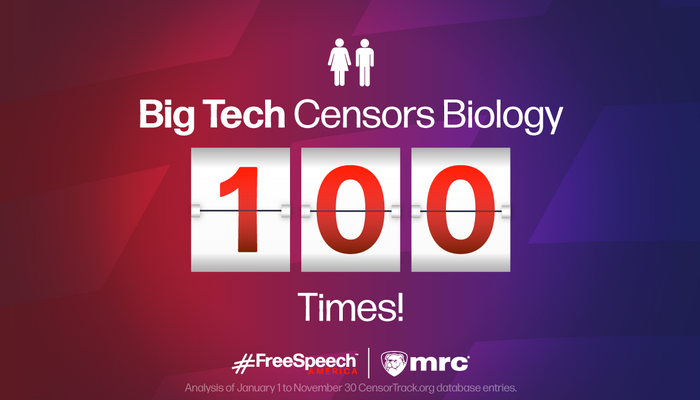 MRC’s CensorTrack found 100 examples of Big Tech censoring content and users who affirm only two genders or recognize biological gender differences over the last 11 months. That’s an average of about two censorship incidents a week.

The left’s transgender ideology permeated American culture deeper than ever in 2021, from President Joe Biden’s transgender assistant health secretary, transgender athletes on U.S. Olympic teams, to hotly debated policies on transgender-inclusive spaces. But Big Tech companies have shut down speech that recognizes the reality of two genders and identified it as “hateful conduct” (Twitter) “hate speech”(Meta and YouTube) and “bullying” and “harassment” (LinkedIn). 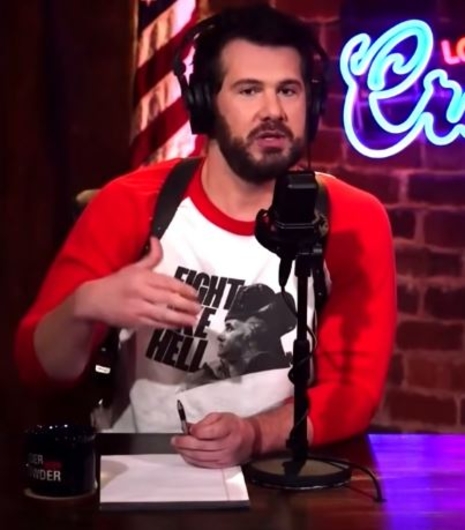 Blaze Media host Steven Crowder posted in early October that YouTube removed an episode of his show after it had allowed the video on the platform for two weeks, according to alleged screenshots Crowder posted. The episode covered a news story on California inmates who became pregnant after the state allowed transgender biological males into women’s prisons. Crowder said YouTube removed the video and suspended his channel for one week. YouTube’s legal counsel allegedly emailed Crowder’s team specifying that his discussion of the story “targets the transgender community in an offensive manner, for example, by indicating that trans people pose a rape threat to women,” according to Crowder’s screenshots. YouTube identified the video as a violation of its hate speech policies only after the story of a transgender high school male who raped two female classmates became national news.

Twitter also censored two members of Congress for challenging the transgender narrative when Rachel Levine, Biden’s assistant health secretary for the Department of Health and Human Services, claimed the title of “first female four-star admiral of the [U.S. Public Health Service] Commissioned Corps,” as HHS described. Rep. Jim Banks (R-IN) responded to the news by tweeting: “The title of first female four-star officer gets taken by a man.” Twitter claimed he broke its “hateful conduct” policy and locked his account until he deleted the tweet, according to screenshots. Rep. Marjorie Taylor Greene (R-GA) also commented on Levine’s new title. “A dude who lived the first 50 years of his life as a man isn’t the first female anything,” she tweeted. Twitter did not remove the tweet but placed a content filter over it and stated that it violated Twitter Rules about “hateful conduct.” 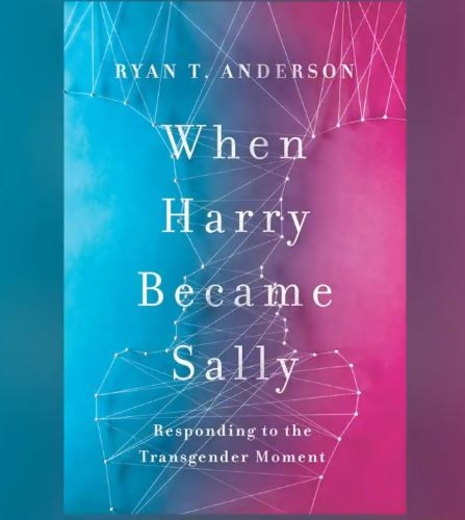 Amazon removed Ethics and Public Policy Center President Ryan T. Anderson’s book “When Harry Became Sally: Responding to the Transgender Moment,” after the book had been listed for three years. Apple also briefly removed Anderson’s work from its “Apple Books” app and Twitter placed sensitive content warnings over images of the book’s cover. The censorship began just a few days after Congress introduced the Equality Act of 2021, which would have abolished female/male-only public spaces in favor of so-called “transgender rights.”

Colin Wright, an evolutionary biologist and managing editor for Quillette, posted a chart from a peer-reviewed paper on his Instagram account. The chart showed the significant physical advantage that biological males have in various female sports. Wright said that Instagram deleted the post for alleged “hate speech.” 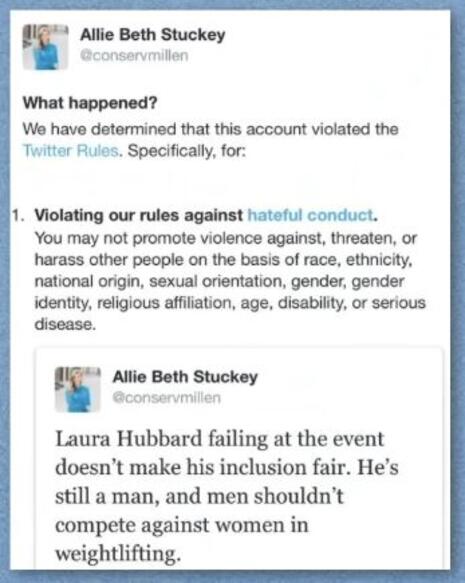 Blaze Media podcaster Allie Beth Stuckey lost access to her Twitter account for 12 hours after she said that transgender weightlifter Laurel Hubbard’s participation on the New Zealand women’s Olympic team “doesn’t make his inclusion fair,” according to her screenshots. When radio personality Erick Erickson attempted to defend Stuckey, Twitter restricted his account too, according to his screenshots.

Georgia gubernatorial candidate, Vernon Jones posted an Epoch Times article entitled “Social Media, Schools and the Rise of Transgender Children: The New ‘Social Contagion,’” according to screenshots tweeted by Jones. Jones vowed in his post that as governor he would “ban by law transgender operations and injections for children,” according to screenshots. LinkedIn removed the post because it allegedly violated its Professional Community Policies on “bullying and harassment.”

Conservatives are under attack. Contact your representatives and demand that Big Tech be held to account to mirror the First Amendment while providing transparency and equal footing for conservatives. If you have been censored, contact us at the Media Research Center contact form, and help us hold Big Tech accountable.