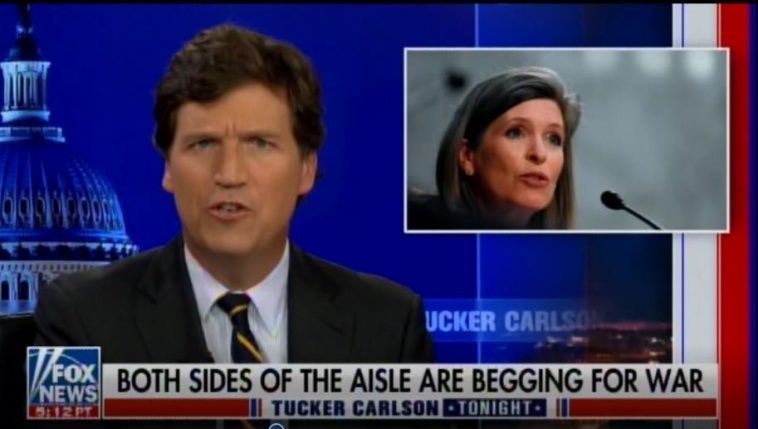 Ernst called for the Putin to shut down his gas pipeline to Western Europe in the winter. The pipeline to Germany was only possible because Joe Biden approved the Russian pipeline after he shut down the American Keystone pipeline from Canada. For some reason Joni didn’t think of this when she was threatening war against Russia.

Tucker Carlson compared Joni to an immature child who has no idea what she’s talking about.

Tucker Carlson:  Here is Joni Ernst, a totally affible, nice Republican.  Totally reasonable in most things from the Midwest.  Suddenly sounding like a blood-thirsty  war monger.  Suddenly sounding more like Adam Schiff as she talks about dastardly Vladimir Putin.

Senator Ernst:  He needs to say to Vladimir Putin that we are no longer going to allow you to continue with the Nordstream II Pipeline.  We need you to know and understand that we will defend Ukraine.  We will provide them assistance.  He needs to make that very clear.

Tucker Carlson:  Putin is so bad we’re going to cut off natural gas to Western Europe in retaliation against him in December.  We’re going to freeze Germany and Luxembourg and that’s going to teach Vladimir Putin.  Again, what you just saw there is a child who has no idea what she’s talking about but keeps talking anyway.  We will defend Ukraine, says Joni Ernst.  Remember, this is a senator from Iowa.  So what happens if we don’t defend Ukraine, Joni Ernst?  Will kids in Des Moines grow up to speak Russian?

The Uniparty wants its war!
And what better way to bail out Joe Biden than to start a nuclear war with Russia?