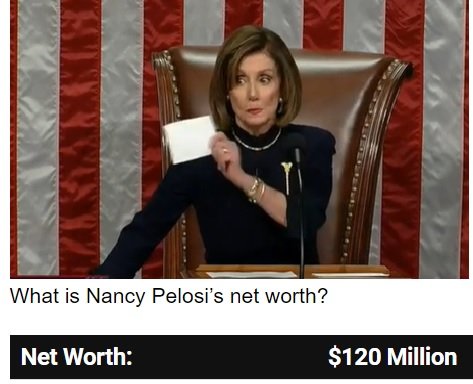 Over her 35 years in Congress, Nancy Pelosi has amassed a personal fortune of over $120 million.

Nancy has developed exquisite tastes over the years. She loves her gourmet ice cream.

Pelosi argued America is a free market economy and therefore lawmakers like her who get early tips should be able to trade stocks.

Of course, the FBI has allowed her to do this for decades.

But, suddenly Pelosi has had a change of heart. On Thursday Pelosi seemed to suggest she is open to a ban on stock trading by members of Congress, a shift from her previous stance.

What changed? Why would Democrats what the rubes think about their stock purchases?

Speaker Nancy Pelosi (D-Calif.) on Thursday appeared to suggest she is open to a ban on stock trading by members of Congress, a shift from her previous stance that members and their families should be allowed to make such financial transactions.

Asked about the hotly contested issue during her weekly press conference, Pelosi said she trusts lawmakers but would be willing to back a ban if it had the support of her caucus.

“I have great confidence in the integrity of my members. They are remarkable. So when people talk about well, somebody might do this and somebody, I trust our members,” she said.

Later in her response, however, she added, “To give a blanket attitude of we can’t do this and we can’t do that because we can’t be trusted, I just don’t buy into that. But if members want to do that, I’m OK with that.”

After she made her 100 million and is leaving Congress. What a joke. https://t.co/HeuHHpilvx