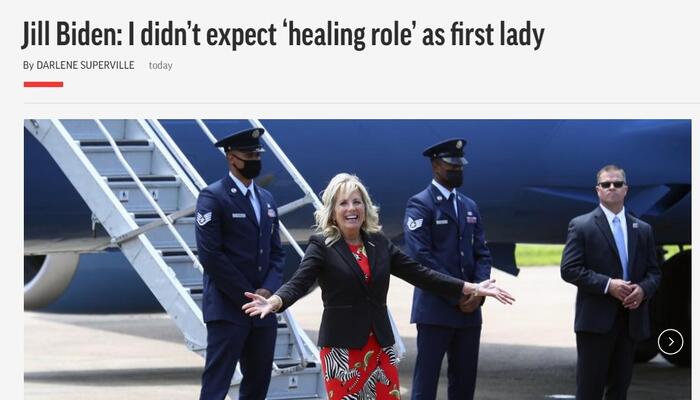 AP should stand for Associated Publicists when they write on Democrat first ladies. Reporter Darlene Superville penned a year-in-review valentine on Monday headlined

This sounds remarkably naive for someone who spent eight years as the Second Lady. At least there was no “Doctor” thrown in, maybe because the “healing” might sound too literal. 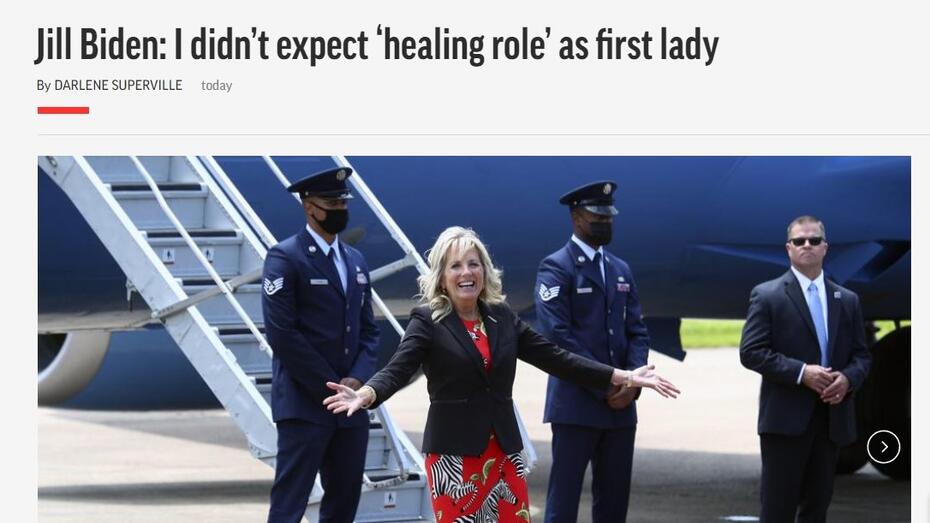 Wrapping up a year in which she saw herself as a key member of President Joe Biden’s team, the first lady told The Associated Press that she found herself taking on a role that “I didn’t kind of expect, which was like a healing role, because we’ve faced so much as a nation.”

Jill Biden spoke sitting in the sunshine near a swimming pool at a Las Vegas hotel a day after she and the president comforted families in Louisville, Colorado, where a huge swath of homes burned to the ground in a late December wildfire. She hugged people as they stood in front of the charred ruins of their lives and later offered public condolences for dogs and other pets killed in the blaze.

There’s no space here to write anything negative or critical, like how Jill Biden was expected to lead an effort to reunite separated illegal-immigrant families, but then she wasn’t. Superville was stuck in “comforter-in-chief” PR mode:

Her visits to Colorado and to see victims of a deadly Christmas parade crash in Waukesha, Wisconsin, and a trip last Friday to tornado-ravaged areas of Kentucky are a “prime example” of the responsibility she feels, she said. It’s what she would want as a regular person who survived a natural disaster or other tragedy.

“I would want to know that my president and first lady cared about me,” Biden said. “I think that’s an important part of what I do. I mean, just helping people through the tough times.”

Waukesha was not a “crash,” it was a mass murder-by-car. And Mrs. Biden didn’t arrive until more than three weeks after the crime occurred.

Now if you thought AP could possibly get through a Biden puff piece without dragging out the Biden car crash, you would be wrong.

She and Joe Biden wed less than five years after his first wife and infant daughter were killed in a 1972 automobile crash, and at age 26 she became a mother to his two surviving young sons. In 2015, the couple buried one of those boys, Beau, after he died of brain cancer at age 46.

The first lady has lost several close friends to breast cancer, and empathized with the people in Colorado because her own home in Delaware once caught fire after a lightning strike.

For a First Lady contrast, consider the last AP report on Melania Trump, which suggested her sale of non-fungible tokens was a scam:

It’s unclear what percentage of the proceeds will be donated, or whether the donations will be given to specific foster child-related charities. An email inquiry about how the donations would be structured were not answered by Melania Trump’s press contact.

Aaron Dorfman, president and CEO of the [leftist] National Committee for Responsive Philanthropy, says when a company says “a portion of the proceeds” will go to charity without indicating specifically what amount, “It’s a huge red flag.”

“It means that charity is not a serious part of their plan,” Dorfman said. “It’s a marketing ploy.”

The Trump family has a troubled history with charities, though Melania Trump was not directly involved in a clash over a charity the family ran in New York.

While still president, Donald Trump paid a $2 million court-ordered fine after conceding he used his charitable foundation as a personal piggy bank. The fine was ordered to be distributed amongst eight charities.

The Trump Foundation was dissolved.

AP’s journalism reads more like a marketing ploy. Or a charity run to assist the Democrats.