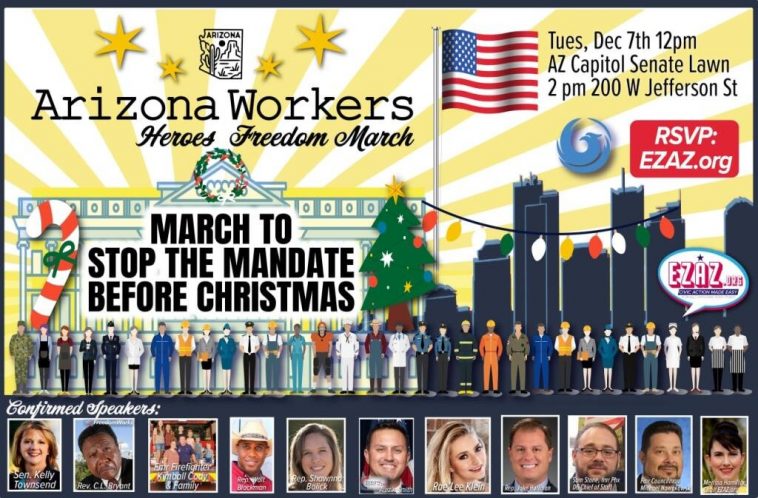 Tomorrow, December 7th, Arizona workers will rally outside of the Arizona Capitol to protest the tyrannical vaccine mandates imposed on employees.

Employees across the country face losing their job this Christmas if they do not compromise their values.

Organizer Merissa Hamilton said, “we have about 1000 City of Phoenix employees that self-organized and asked me to help them push back. It then expanded to firefighters all across the state.”

The March will begin at 12 pm at the Arizona Capitol and it will close at 200 w Jefferson st. at 2 pm.

Only 25% of police and firemen had submitted proof of vaccination at the time. Many others have left their job because they refuse to comply.

They are using the vaccine mandate as a backdoor to defund the police.

Soon they will make all employees including election workers submit proof of vaccination.

EZAZ.org put out the following notice on tomorrow’s rally.

MAKE YOUR VOICE HEARD AT THE CITY OF PHOENIX

Phoenix public safety is already in a crisis Police and Fire are both terribly short-staffed and 911 response times are horrific. We don’t even have enough officers required to manage a minimum number of 911 calls. Departments are now facing mandatory overtime while at the same time the City of Phoenix is mandating vaccines for all employees. They say it’s because of the Federal Mandate, but the mandate is now on hold by the courts.

The mandate will CRUSH public safety and the most vital City services like trash, water, and infrastructure! Phoenix is putting the safety of your neighborhoods at risk, but you can stop the madness!​

Tell Phoenix to stop enforcing the executive order and instead adopt the United Auto Workers plan which makes forms, disclosure, and accommodations all OPTIONAL! All Arizona employers should keep medical decisions between patients and their doctors, especially since we have an abundance of treatment options!

YOUR VOICE IS NEEDED TO SAVE OUR CITY!

You can submit your public comment at the next Policy meeting at the link below or sign up to speak at the meeting on Tuesday, December 7th. Be sure to choose agenda item “1 Discussion of Presidential Executive Order 14042.”

*Please note, you will need to create an account at the City of Phoenix before filing your comment if you have not registered previously.

You can submit your public comment at the next Public Safety meeting at the link below or sign up to speak at the meeting on Wednesday, December 8th. Be sure to choose agenda item “000 CALL TO THE PUBLIC.”

Arizona will not comply with unconstitutional mandates.