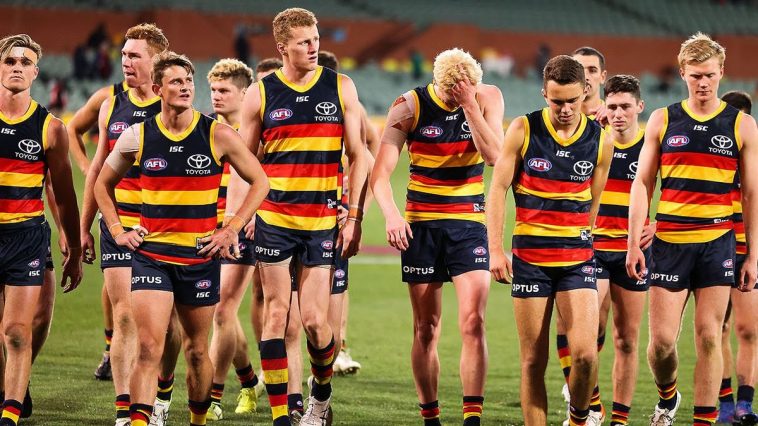 A top player with the Adelaide Crows was sent to hospital and diagnosed with pericarditis after receiving Pfizer COVID-19 vaccine.  FIVEaa’s Stephen Rowe reported this on his show Friday.

The player spent a day in the hospital and was diagnosed with pericarditis. His cardiologist told him that he is not allowed to exercise for three months and he should take medications. The identity of the player was not published for privacy reasons.

A Crows top-up player two weeks ago got his first COVID jab. He needed to do that to train, obviously, because the top-ups trained with the senior boys at times. So in short, he presented symptoms to the club doctor who acted immediately and sent him to the RAH. I think that was maybe on Wednesday. And the doctors are just brilliant, absolutely superb to be able to pick up symptoms like that. Anyway, off goes the young kid, after testing was diagnosed with pericarditis.

And if you don’t know what pericarditis is, it’s the swelling of the outer tissue of the heart. It’s scary. He spent a day in the hospital. The young lad, his cardiologist has said for three months, no exercise and he’s on medication. Our understanding after a number of phone calls today, his prognosis is very good. He’ll make a full recovery and I say, thank God. And the reason I say that my niece, my brother’s middle daughter, had exactly the same thing, probably around the same age.

It is mandatory for players and officials to be fully vaccinated. Following the ordeal of one of the players, Adelaide Crows’ director Nick Takos has resigned from his position, criticizing the Australian Football League’s “forceful” mandatory COVID-19 vaccination policy.

Takos says he sought and was denied a medical exemption from having a COVID-19 vaccine.

“The AFL’s COVID mandate, and the club’s deeply concerning response to it, has left me with no choice but to step down,” Takos said in a statement on Wednesday, 7News reported.

“While I am not anti-vaccination generally, corporations should not tell their staff and footy fans what medical treatment is good for them through a mandatory vaccination policy.

“I cannot support a coercive and forceful policy that does not consider the proportionate risk to players and staff.

“I cannot support a policy that unfairly discriminates against our highly diverse 60,000 members and over 650,000 fans who have a wide range of personal and medical considerations when it comes to vaccination.”

The cut-off date for a first vaccination dose under AFL rules was November 19.

Takos said he became “increasingly concerned” after one of Adelaide’s SANFL players was diagnosed with pericarditis, a serious heart condition.

He said the state league player was diagnosed “as a result of taking the COVID vaccination at the direction of the AFL and club”.

“Based on this, I called a special board meeting to urgently discuss the player’s condition, the health and safety of all of our players and other associated risks,” he said.