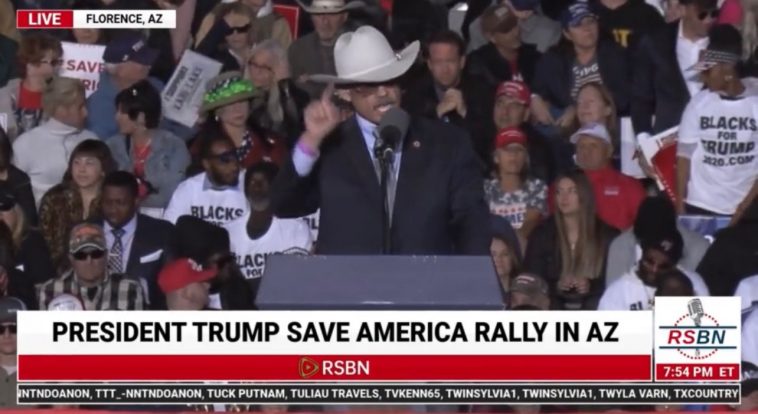 During the rally, Trump-endorsed Arizona State Senator Wendy Rogers called for decertification of the fraudulent 2020 presidential election in the 2022 legislative session, which started last week.

State Senator Wendy Rogers Speaks At AZ Trump Rally: “I Am A Yes Vote To DECERTIFY. Many Of My Colleagues In The Arizona Senate Want To Decertify.”

While on stage, Rep. Finchem joined State Senator Rogers in her calls for decertification of the “irredeemably compromised” 2020 Presidential Election.

He also spoke about critical election reform that he has sponsored in the Arizona House, including banning voting machines, conducting regular audits, ballots with currency-grade fraud countermeasures, and making ballot images publicly available to the voter.

Finchem: From Maricopa County to Pima County and yes, even all the way down to Yuma. We have a systematic problem. I’m not talking about voter fraud. I’m talking about election fraud. We’re always going to have voters that cheat, but we have systems that are broken. We need to repair those systems. We need to take care of those systems. We need to maintain those systems. You deserve a secretary of a state who will put your interests first, who will diligently promote voter list clean up, watermarks on ballots, a verifiable audit trail, and to refer criminality to the Attorney General’s office when it’s found. We must take what we’ve learned in the audit and restore your confidence in your elections, but I’m going to need your help. I look forward to the day that we set aside an irredeemably flawed election. That’s the election of 2020. With all the evidence we have, the Arizona election should be decertified with cause by the legislature. And yes, the unenumerated powers of the 10th Amendment do indeed give the state legislatures around this country, when they have an irredeemably flawed election, irredeemably compromised means they cannot determine who the real winner is because the election is so polluted. It is time for us, the Arizona legislature to move those counties which are irredeemably compromised into the you’re decertified section. This is how the people can get justice. Now, if you want to join me, and you want to help me clean this mess that Katie Hobbs and Adrian Fontes created. I need to have you go to VoteFinchem.com, sign my petition at the top of the page, and read the news because every single thing that I put out there is on the News tab. I’m probably going to be the most transparent candidate you have ever seen in a political race. Every news hit is out there. God bless you, and God bless Donald Trump.