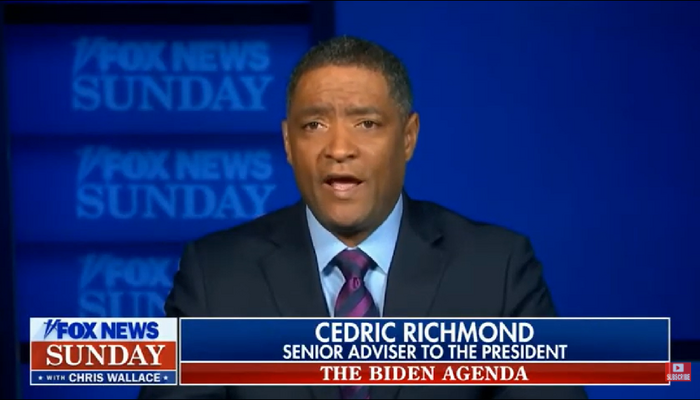 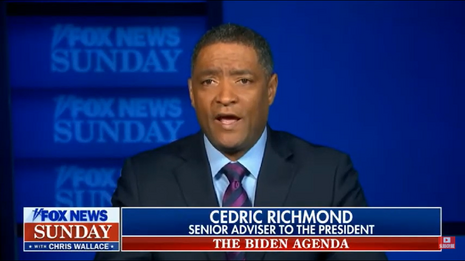 If a reporter asks a president a question in which the answer is deceptive at best and a flat out lie at worst, would that make the reporter asking the question “disrespectful?” According to Joe Biden’s senior adviser, Cedric Richmond, it does. Despite the fact that Biden answered Fox News White House correspondent Peter Doocy’s question about if each illegal crossing the border who was temporarily separated from their children would receive a payment of $450,000 in a much less than candid manner, the outrage should be directed towards Doocy in the bizarre reasoning of Richmond.

As you can see in the video of Richmond’s appearance on Fox News Sunday, Richmond’s outrage is directed in a rather heated way towards Doocy for asking a question in which Biden was  subsequently forced to backtrack three days after his initial denial of what he initially labeled a “garbage” report:

BILL HEMMER: There’s still confusion on another topic, as to whether or not the government will make payments to illegals. Here’s what the president said on Saturday when asked about it.

JOE BIDEN: If, in fact,  of the outrageous behavior of the last administration, you coming across the border, whether it’s legal or illegal, and you lost your child — you lost her child, he’s gone, you deserve some kind of compensation no matter what the circumstance.

HEMMER: So, again, that was yesterday. On Wednesday, however, he said this to Fox News.

PETER DOOCY: Do you think that that might incentivize more people to come over illegally?

BIDEN: If you guys keep sending that garbage out, yeah. But it’s not true.

DOOCY: So, this is a garbage report?

HEMMER: So, within an hour of that comment, the ACLU said, quote, President Biden may not have been fully briefed about the actions of his very own Justice Department, and went on from there.

Was he in the loop to begin with?

And if you go back to the question, the question was from a Fox reporter asking about whether compensation for being separated and losing a child would be an incentive to come to America. And what he was saying was that was an absurd question from the beginning. No one is coming somewhere to lose their child, to be separated from their loved one.

And the question is so insensitive, disrespectful, that that’s what he’s commenting to.

And I would ask a question of you whether you support that. I mean, at some point, we cannot with a straight face say that parents are willing to separate from a child for a dollar amount. That’s just not true. And we should not talk like that. We keep saying we’re better than that, but we’re not acting like that.

But, again, the question is, we took children — that President Trump took children from their parents and some children have never been returned. Do we think that’s okay?

So But just back to this amount of $450,000. That would be about four times the amount that we afford Gold Star families.

RICHMOND: We don’t talk dollar amounts. That is the Department of Justice. The question about whether it is an incentive to come across to the United States to be separated from your child so that you can get paid is an absurd assumption.

Exit question: So does this mean that all the other White House reporters who refrain from asking questions that reveal that Biden is either out of the loop or deceitful are somehow respectful?