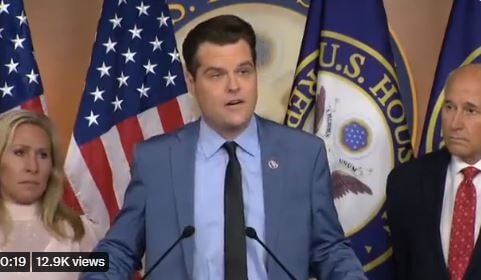 Rep. Marjorie Taylor Greene (R-GA) and fellow Republican lawmakers Matt Gaetz, Louie Gohmert, and Paul Gosar, held a news conference on Tuesday to share a report on the cruel treatment in the DC Gulag. Greene and her fellow lawmakers released their findings that detail the cruel and unusual treatment of Trump supporters jailed for their participation in the Jan. 6 attack on the U.S. Capitol.

Marjorie Taylor Greene opened up the event by pointing out to the press that in 2020 there were over 500 violent BLM-Antifa riots in the US.

Black Lives Matter-Antifa mobs caused over one to two billion dollars in damages in cities across America since May. In Minneapolis alone, Black Lives Matter mobs damaged or destroyed over 1,500 businesses or buildings. There is a difference.  There is a double standard. The system is corrupt and broken.

On Tuesday MTG called the J6 investigation a witch hunt on Trump supporters.  As for the unconstitutional treatment of J6 prisoners, Greene did not hold back. She described the how the J6 protesters are being beaten, labeled supremacists, denied haircuts, and bail.  It is unconscionable.

During the press conference on Tuesday, Rep. Matt Gaetz fired a warning shot to the Marxists in control of the US House — YOUR DAY IS COMING.

Rep. Matt Gaetz:  It’s been 174 days since my colleagues and I sent a letter to Director Wray asking basic questions about the FBI’s involvement in January 6th.  Americans should not be languishing in hideous, unconstitutional conditions waiting for basic answers like this.  Waiting for basic answers on evidence.  Waiting for basic answers on counsel.  This report must be a guidepost for ongoing Republican oversight effort in Congress…  We are going to take power after this next election. When we do, it’s not going to be the days of Paul Ryan, and Trey Gowdy, and no real oversight, and no real subpoenas. It’s going to be the days of Jim Jordan, Marjorie Taylor Greene, and Dr. Gosar, and myself.”

I never thought that I would see the day where American citizens are accused of a crime and locked away without charges being brought.
The new standard is the govt can accuse you of being an insurrectionist and deny you due process. https://t.co/AgdcXwdHvk