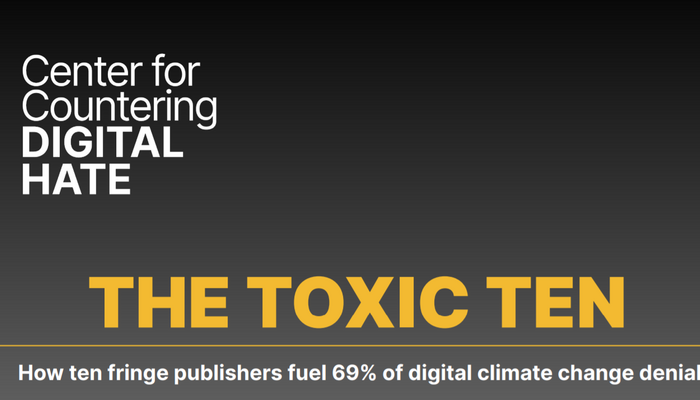 The U.K.-based Center for Countering Digital Hate wants to censor organizations that disagree with it on climate policy. It released an absurd report attacking the Media Research Center and eight other conservative organizations in an attempt to shut them down online.

The leftist group behind the attack is led by a socialist who co-authored a book about “how to defeat” conservative ideas. The group promotes leftist eco-extremism, but behind all that are its deep ties to Communist China. The CCDH is funded by a leftist eco-group that financed a “greening” scheme for Communist China’s Belt and Road Initiative.

The propaganda report headlined “THE TOXIC TEN: How ten fringe publishers fuel 69% of digital climate change denial” includes three recommendations to censor the organizations the group doesn’t agree with. These include: “Stop monetizing” their content; stop allowing them to buy ads and it even wants social media firms to “comprehensively label” what it calls “climate denial.”

MRC founder and President L. Brent Bozell slammed the attack. “Digital brownshirts are attacking conservative organizations for daring to have an honest debate on climate policy. These anti-free speech bigots want to shut down anyone who dares to disagree with them. Calling for more biased fact-checks as a way of silencing scientific debate is insane. This is another typical left wing cancel culture attempt borne out of anti-conservative bigotry. Stop Big Tech Cancel Culture!”

Digital brownshirts are attacking conservative organizations for daring to have an honest debate on climate policy. These anti-free speech bigots want to shut down anyone who dares to disagree with them.

The report also targeted eight other conservative organizations: The Daily Wire, Breitbart News, Washington Times, Townhall Media, Newsmax, The Federalist Papers, The Patriot Post and The Western Journal for daring to promote debate over the left’s approved climate change narrative. Specifically, it accused 10 outlets of being the “main producers of content that sows climate change skepticism on social media platforms, creating the sense that there is a more extensive debate than there really is.”

The CCDH is anything but impartial in the climate change debate. CCDH is funded by the Switzerland-based, left-wing Oak Foundation, which the Capital Research Center labeled as “The Left’s Green Giant.” CCDH was given at least $100,000 by Oak in 2020 alone, according to Foundation Directory Online data. The purpose of the grant was to allegedly help shine “a spotlight on digital misinformation platforms that are polluting the public discourse on issues such as climate action, women’s rights, and racial equality.” [Emphasis added.]

Here’s the damning part about the pro-censorship CCDH being connected to Oak. “In 2018, Oak gave $1 million to ClimateWorks Foundation ‘to support the greening of the Belt and Road Initiative,’ a global trade infrastructure project pushed by Chinese President Xi Jinping to link the communist country with the rest of Eurasia,” according to the Capital Research Center. Foundation Directory Online data confirm the existence of the grant. The grant description reads:

To support the greening of the Belt and Road Initiative. This will help prepare countries to meet their international financing ambitions without underwriting new sources of emissions inconsistent with climate stabilisation.

The fact that CCDH is receiving funding from an organization backing Communist China’s initiative to “green” its Belt and Road projects taints its image. The BBC, also based in the U.K., released a report in May 2021 headlined: “Report: China emissions exceed all developed nations combined.” Xi Jinping sees the “‘One Belt, One Road’” grand strategy “as a lethal weapon that can hopefully help China replace the United States in 20 years’ time as the world’s No. 1 superpower,” according to an article by Hong Kong outlet EJ Insight in 2016. The article was written by Chinese University of Hong Kong Adjunct History Department Professor Willy Lam Wo-lap.

The Capital Research Center showed why the “greening” verbiage used by Oak Foundation surrounding the Belt and Road Initiative was pro-Chinese propaganda:

Jane Nakano, a senior fellow of the Center for Strategic and International Studies, expressed strong skepticism about the rhetoric of environmentalism surrounding the Belt and Road Initiative, and said the attempts by the U.N. and the Chinese government to rebrand the project with a ‘greening’ effort should be seen as a case of ‘greenwashing,’ likening the Initiative’s environmental forum to a ‘useful customer relations occasion for Beijing,’ [emphasis added].

That’s not all. The Oak Foundation is also listed as a “key funder” for Energy Foundation China, a U.S.-based organization that has worked “in China since 1999, and is dedicated to China’s sustainable energy development.” The EFC “funded 3,113 projects operated by over 796 grantees in China, with total funding amount over 359 million dollars.”

The CCDH apparently doesn’t have any issue taking money from a pro-Chinese group. An analysis of CCDH’s leadership reveals a collection of left-wing activists that completely undercuts the organization’s objectivity.

Founder and CEO of CCDH Imran Ahmed has a history as an activist for Britain’s leftist Labour Party. He also co-authored a book attacking free market economist Friedrich Hayek titled “The New Serfdom: The Triumph of Conservative Ideas and How to Defeat Them.” In the book’s introduction, it says that it looks “at what a Labour government, pursuing a reinvigorated democratic socialism, might do to remake our economy and our society in a complex and rapidly changing world.” [Emphasis added.]

In addition, the book says it “considers the case for creating an empowering state which actively intervenes to improve on market-based outcomes and ensure greater opportunities for all.” [Emphasis added.]

Chairman of the Board for CCDH Simon Clark is a nonresident senior fellow at the leftist Center for American Progress (CAP), which is funded by liberal billionaire George Soros. Soros’s Open Society Foundations gave CAP $1,625,000 between 2019-2020 alone.

The CCDH report was biased even in its analysis. According to the study, it used a query that “was intended to identify articles that use words or phrases typically associated with climate denial” and that strangely included leftist billionaire Soros.