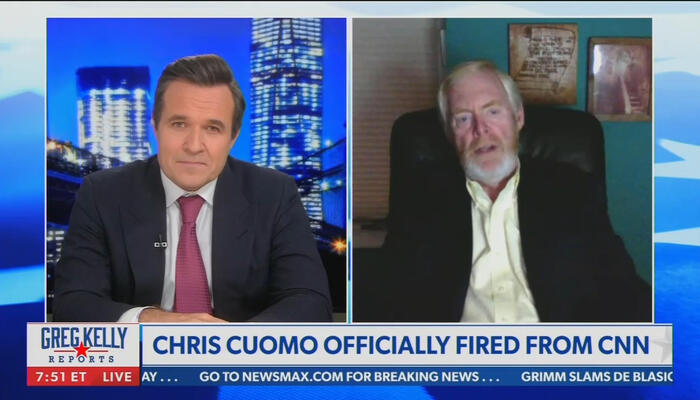 “I would be perfectly okay if he just said this is an opinion show….the idea that you’re just going to find out what happened, I’m not sure if that’s as valuable anymore, but they still insist on the pretense, you know?,” host Greg Kelly observed about CNN’s false portrayal of Cuomo as a journalist. Bozell replied: “…why call him a news anchor when he’s having a talk show, and he’s interviewing his brother and passing softballs? There’s no news in that.”

He added: “In fact, if you think about the Cable News Network, there’s very little news.”

Bozell then hammered the leftist media outlet for pretending like it suddenly realized Cuomo was guilty of wrongdoing:

Later in the discussion, Bozell called out Cuomo’s “arrogance” for thinking he could get away with everything without consequence: “…had he simply taken a leave of absence from CNN – or at the very least, recused himself from any coverage of his brother – I’d have no problem with it. But this shows the arrogance of Chris Cuomo that he would do that and go on national television and call himself a news network.”

GREG KELLY: Wow, breaking news! And front page news in The New York Times, front page news that some guy on cable lost his show. Most Americans don’t even know he has that show. You compare this to Walter Cronkite. Walter Cronkite was perhaps the most important broadcast journalist who ever lived. Might not have been the best, might have been a bit of a lefty. When he left, when Dan Rather took his job, The New York Times put it on page C-30. And when they actually made the switch, that was the announcement, they put it even deeper in the paper, on page 47, right on top of the TV Guide: “Cronkite Says Goodbye.” What has happened to our media culture?

I want to cover all this with Brent Bozell, the great Brent Bozell, President and founder of the Media Research Center. He is also the author of Stops Along The Way; A Catholic Soul, A Conservative Heart, an Irish Temper and A Love of Life, to be released tomorrow, December 7th. Congratulations, we’ll ask you about the book as well. Brent, welcome, how are you?

KELLY: Well, I gotta tell you, I was really wondering about that. And it occurred to me, like, why are we making such a big deal? And I remember when Cronkite left and sure enough. Why are we so obsessed? Or why is the fake news so obsessed with these little watched liberal TV folks?

BOZELL: Well, one is the only people who watch them are reporters from The New York Times who write the stories. That and people at the dental office but the – look, the last – think about Bernie Shaw for a second. The reporter for CNN, the anchor, you know, in the 1990s, he was the least known, most important reporter on cable news. And by that I mean that when you watched CNN you didn’t watch Bernie Shaw. You watched the news. When you watched CBS under Walter Cronkite, you were watching the news. He was secondary to this.

KELLY: It’s interesting, you know, and I would be perfectly okay if he just said this is an opinion show. I say that about my show. And quite frankly, we already know what happened because of our phones by the time eight o’clock or nine o’clock or 10 o’clock rolls around, whenever his show is on. So the idea that you’re just going to find out what happened, I’m not sure if that’s as valuable anymore, but they still insist on the pretense, you know?

Let me tell you another piece of BS, this idea that they just learned that he might be some kind of a sexual predator. Look, this goes back to ABC, they knew – he’s a Cuomo. They knew who he was, they knew what he was doing, and for them to have the idea that suddenly they learned all this. This is just hypocritical, I’m sorry.

KELLY: Brent, that’s one thing, though. Look, in my book, he could have been fired a long time ago when Rudy Giuliani fact checked him, and Cuomo insisted, he was very disrespectful. But regarding this allegation, it comes from when he was at ABC. And the lawyer involved is Debra Katz. And she is the one who facilitated Christine Blasey Ford. And I see this as a selective type of cancel culture and they can pull the trigger on you whenever they want. And I’m a little –  look, we have his resume of Cuomo’s tenure at ABC. He was there from 2000 to 2013. And now this woman comes forward, allegedly, she says, to protect women, that’s her goal, to protect women. I mean, if she wanted to protect women, I think you might have come forward whenever it happened, not nine years later. So I find that part of the story – I’m somewhat sympathetic to Cuomo and I, because I find that a little absurd. This – anything that Debra Katz touches after the Christine Blasey Ford thing.

BOZELL: Two areas where I agree with you. Number one, I sympathize with somebody who is as loyal to his family as Chris Cuomo is. Had Chris Cuomo done everything with all those phone calls, all that stuff he was doing behind the scenes, had he simply taken a leave of absence from CNN – or at the very least, recused himself from any coverage of his brother – I’d have no problem with it. But this shows the arrogance of Chris Cuomo that he would do that and go on national television and call himself a news network. The second area, and I’m even stronger in my in my support for you on this position, when you look at these women – and the Kavanaugh story was a perfect example of this – who come forward years and years after the fact. Clarence Thomas, Antia Hill, years after the fact. I’m sorry, I don’t buy it.

BOZELL: Throw the book at somebody if somebody comes forward then, but they waited till Chris Cuomo was gone. And then they went after him.

KELLY: Brent, come back later this week, we’re going to talk about the book and a lot more to talk about in the media landscape. We have to run. Thank you so much, sir. From the Media Research Center.