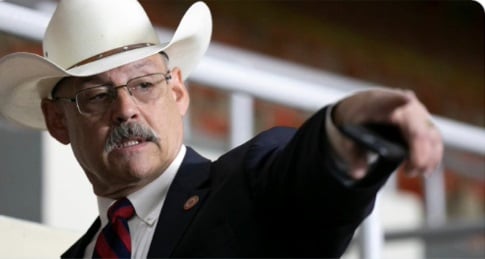 The mission of this hearing is the same as it was in the November 30, 2020 hearing. The objective is to “receive evidence and testimony that could serve to prove or disprove alleged discrepancies in the 2020 General Election.”

It has been 75 days since Arizona Attorney General Mark Brnovich received this evidence and he has done nothing!

The Gateway Pundit reported that this fraud goes beyond Maricopa County. President Trump recently released a statement revealing new data from Pima County, including precincts in Pima with over 100% voter turnout.

AZ State Rep and Trump Endorsed candidate for Secretary of State Mark Finchem spoke about some of these discrepancies, including 35,000 fictitious votes inserted into Pima County’s election.

Finchem reveals that their whistleblower “claimed to be in the room when the plan was revealed to lower-level Pima County Democratic Party leaders.”

The Pima County meeting is next Monday.
Details below–

“On November 7, 2020, an anonymous report of election system fraud was made to the United States Department of Justice and ALL members of the Arizona House and Senate. The allegation that 35,000 fictitious votes had been entered into the Pima County election was related by an individual who claimed to be in the room when the plan was revealed to lower-level Pima County Democratic Party leaders.

“Over the last 12 months a few Members of the Legislature and resources from various election integrity organizations have conducted a quiet, but fruitful investigation into the substance and reliability of the allegation.

“Our elections are a system, and systems require active maintenance. Without attention to detail, the bureaucratic machine inevitably runs amok. We are elected to identify defects and fix them.” Rep. Biasiucci

“We found significant discrepancies in the Maricopa County Election through the audit, which gives us all pause to consider what has happened in other counties? To think that we would not find similar problems in other counties is not a credible position for any elected official to take.” Sen. Sonny Borrelli

“With consent of the Governed goes the right of the Governed to to examine, and if warranted, conduct an audit of the elections that they participate in. Elections belong to the People, not the government.” Rep. Finchem

On November 30, 2020, we held a Public Hearing on Election Integrity that gave the public an opportunity to present evidence and sworn testimony to the joint panel of Members of the State Legislature regarding the 2020 General Election. The mission of the Public Hearing on Election Integrity was to, “receive evidence and testimony that could serve to prove or disprove alleged discrepancies in the 2020 General Election.” Arizona citizens and expert witnesses submitted sworn affidavits, under penalty of perjury, to the panel detailing inconsistencies they encountered during the election process.

Pima County voters who have first-person knowledge of a violation of Arizona elections law, a violation of the Arizona Elections Procedure Manual, and who may have physical evidence are asked to contact Sen. Kelly Townsend (LD-16) at 602-926-4467.

This hearing will be held with the same objective. Press organizations may contact 602-826-7300 for information on access.

Mark Finchem is working to audit Pima county and uncover the truth statewide in Arizona. Sign the nationwide petition to audit Pima County.