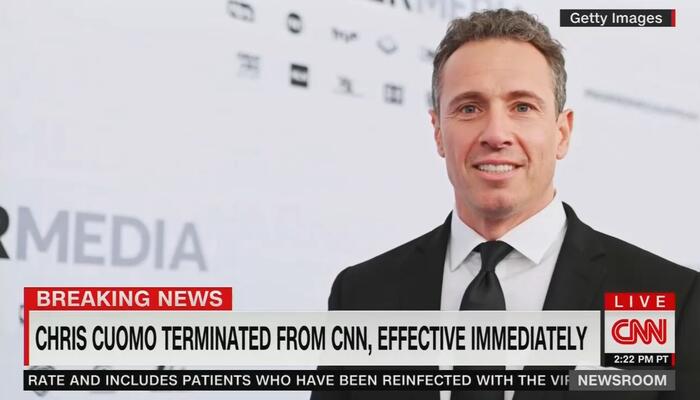 CNN said in a statement that Cuomo has been “terminated…effective immediately” four days after he had been suspended due to a trove of text messages showing the depths of his relationship with his brother’s top aides to weather the sexual harassment claims leveled against Andrew. They added the investigation led by “a respected law firm” revealed “additional information.”

Importantly, this statement revealed that they did indeed hire someone to look into Cuomo’s behavior. But more importantly, the network wouldn’t detail this new, damning information, so time will tell if Zucker will share said “information” or simply move on from this as if the downfall of his friend and now-ex-employee never happened.

That’s on top of the fact that they still proclaim themselves to be the “most trusted name in news” and “facts first.”

The statement concluded with a claim that “[d]espite the termination, we will investigate as appropriate.”

Joining the likes of Dan Rather and Brian Williams in losing a plum job at a major network, Cuomo still maintains a show on SiriusXM called Let’s Get After It (at least as of this blog’s publication).

Incredibly, CNN almost immediately brought the news to viewers on the air following the 5:09 p.m. Eastern CNN Public Relations tweet and in contrast to their delay when Fredo was suspended on Tuesday.

Even more ironic? Look who was the person who was on-air at 5:22 p.m. Eastern when it came down:

#BREAKING: I am not making this up — Jim Acosta was on the air when CNN announced that they fired Chris Cuomo, leaving him to break the news to viewers alongside Brian Stelter

As for what’s missing, CNN didn’t disclose why it was so necessary to suddenly terminate Cuomo at a time when many in the media felt that his abuses of sources and his know breaches of journalistic ethics were already enough to warrant his termination.

In the days prior, the network’s chief media apologist Brian Stelter claimed Cuomo would be came on-air as soon as January.

And in addition to what the new evidence is, it’s shows just how much of a liar he’s been. Now only was he lying to his viewers about his involvement with his brother’s defense, but also his employers. Again, it’ll be worth monitoring to see what SiriusXM determines as to the fate of his POTUS show.

With Cuomo gone, what is poor Don Lemon to do? Based on his interaction with him during what became Fredo’s final show on Monday, even Lemon seemed to have figured it was curtains for his dear friend.

With Cuomo gone, what is poor Don Lemon to do? Based on his interaction with him during what became Fredo’s final show on Monday, even Lemon seemed to have figured it was curtains for his dear friend.

Stay tuned to NewsBusters for more on this breaking story.