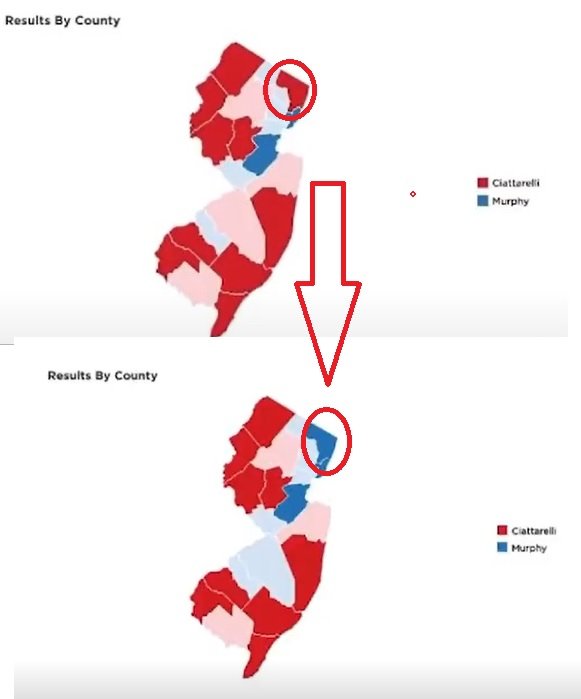 Last night the governor’s race in New Jersey was showing the Republican challenger Jack Ciattarelli in the lead over the incumbent Democrat Phil Murphy.  Then miraculously things changed.

With 83% of the votes counted in the state, Republican Ciattarelli held a statewide lead of 42,000 votes.  At this time, Bergen County, the largest county in New Jersey, claimed 100% reporting with Ciattarelli winning 52% of the vote.

Then things changed.  Minutes later, with 87% of the vote counted, the results in Bergen County changed and suddenly Murphy was reported ahead in the county with 51% of the vote.  Ciattarelli’s 42,000 vote in the state also dwindled to a  1,600 vote lead at this time.

Here is a video describing what happened.

This was also reported in a tweet this morning.

We need to know EXACTLY what happened at 1:54am in Bergen County #NJ#NJGov #AuditNJ pic.twitter.com/kbTjX92qsO

Here’s another tweet showing this anomoly, er glitch, er whatever…

Bergen County, NJ reported 219,894 votes last night at midnight – 100% reporting, with 52% for @Jack4NJ. This morning Bergen County has 261,528 votes (40k more votes) and now shows @GovMurphy as the declared winner of that county. Share this. Make them report it. FULL AUDIT. pic.twitter.com/hfzfY5TnKj

What’s going on in New Jersey?